Ontario Hydro, established in 1906 as the Hydro-Electric Power Commission of Ontario, was a publicly owned electricity utility in the Province of Ontario. It was formed to build transmission lines to supply municipal utilities with electricity generated by private companies already operating at Niagara Falls, and soon developed its own generation resources by buying private generation stations and becoming a major designer and builder of new stations. As most of the readily developed hydroelectric sites became exploited, the corporation expanded into building coal-fired generation and then nuclear-powered facilities. Renamed as "Ontario Hydro" in 1974, by the 1990s it had become one of the largest, fully integrated electricity corporations in North America.

The notion of generating electric power on the Niagara River was first entertained in 1888, when the Niagara Parks Commission solicited proposals for the construction of an electric scenic railway from Queenston to Chippawa. The Niagara Falls Park & River Railway was granted the privilege in 1892, and by 1900 it was using a dynamo of 200,000 horsepower (150,000 kW) which was the largest in Canada.[1] Starting in 1899, several private syndicates sought privileges from the commission for generating power for sale, including:[2]

By 1900, a total capacity of 400,000 horsepower (300,000 kW) was in development at Niagara, and concern was expressed as to whether such natural resources were being best exploited for the public welfare.[3] In June 1902, an informal convention was held at Berlin, (now Kitchener) which commissioned a report by Daniel B. Detweiler, Elias W.B. Snider and F.S. Spence, who recommended in February 1903 that authority be sought from the Ontario Legislature to allow municipal councils to organize a cooperative to develop, transmit, buy and sell electrical energy.[4] The provincial government of George William Ross refused to allow this, and it was only after its loss in the 1905 election that work began on creating a public utility. During that election campaign, James Pliny Whitney (who would become Premier) declared:

The water power of Niagara should be as free as the air.[5] 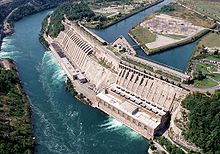 In May 1906, the Hydro-Electric Power Commission of Ontario ("Hydro" or "HEPCO") was formed[6] and its first commissioners were Adam Beck, John S. Hendrie, and Cecil B. Smith,[7] HEPCO was a unique hybrid of a government department, crown corporation and municipal cooperative that coexisted with the existing private companies. It was a "politically rational" rather than a "technically efficient" solution that depended on the watershed election of 1905.[8]

On January 1, 1907, referendums in Toronto and 18 other municipalities approved the provisional contracts that their councils had concluded with HEPC,[9] and subsequent referendums one year later authorized utility bond issues for the construction of local distribution systems.[10] The victories in Toronto were in large part due to the leadership and commitment of Adam Beck's ally, William Peyton Hubbard.[11] The first transmission lines began providing power to southwestern Ontario in 1910. Berlin (Kitchener) would be the first city in Ontario to get hydroelectric power in long-distance transmission lines from Niagara Falls, on October 11, 1910.[12]

The commission's process of expansion was from municipality to municipality, generally in the following manner:[13] 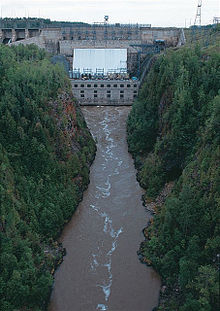 In 1926, the Ferguson government gave its approval for Abitibi Power and Paper Company to develop the Abitibi Canyon, the largest such development since the Niagara River, in preference to incurring more debt for Ontario Hydro.[18] The development was encouraged through secret commitments for long-term purchases of electricity and indemnification of Hydro against any losses.[18] Questions were asked at the time as to how the additional 100,000 horsepower (75,000 kW) in capacity would be used, as there were virtually no customers for it.[19] When Abitibi was placed in receivership in 1932, legislation was passed over the following years to allow Ontario Hydro to take control of several Abitibi power developments.[a] Certain dealings relating to the 1933 acquisition came to be known as the "great Abitibi swindle,"[21] which resulted in the fall of the Henry government in the 1934 Ontario election, to be succeeded by that of Mitchell Hepburn.[21]

In 1939, the commission was given authority to regulate all other electricity generators, thus bringing all private utilities in the province under its supervision. It also received authority to acquire any utility that was not producing at its capacity.[22][23]

In 1948, HEPCO changed most of its system from 25 Hz to 60 Hz. However, the Fort Erie area south of Niagara Falls stayed on the remaining 25 Hz generators until 1966, and this area had electricity throughout the 1965 Eastern Seaboard Blackout.

By the 1950s the commission was operating as a single integrated system. As demand rose in the post-war period, Ontario Hydro started expanding its generation system bringing on line many new hydroelectric stations. In 1953, Ontario Hydro began to interconnect with other utilities, the first interconnection being the Keith-Waterman line in Windsor which crosses the Detroit River to Detroit, Michigan interconnecting with Detroit Edison in the United States. This line was originally constructed at 120,000 volts and was later upgraded to 230,000 volts in 1973. Shortly thereafter, other interconnections with New York State were built. The first coal-fired generating stations in the system were also built in this period. The expansion of coal continued during the 1960s and 1970s but was overtaken by the development of nuclear power.

In 1912, Adam Beck began to promote the creation and operation of electric interurban railways in the territory served by the commission, and the Legislative Assembly granted authority to do so in The Hydro-Electric Railway Act, 1914.[24] Changes in government policy and public sentiment in the 1920s restricted their development, and all such operations ceased in the 1930s (with the exception of the Hamilton Street Railway streetcar system, which continued until 1946).[25]

In the 1960s, HEPCO was the first utility in North America to utilize ultra-high voltage transmission lines. Planning for the UHV lines began in 1960 and in 1967, HEPCO put into service transmission lines carrying 500,000 volts that carry power from hydroelectric sources in remote Northern Ontario to high load areas in southern Ontario such as Toronto, London, and Ottawa. By 1970 all but the most remote municipal power systems in Ontario were organized into a single grid. During the 1970s and 1980s, Ontario Hydro gradually expanded the 500 kV transmission system into what it is today.

Before its own nuclear power stations started coming onstream, Ontario Hydro had the following capacity and output:[26]

In 1974, the commission was reconstituted as a crown corporation known as Ontario Hydro,[27] which had been the commission's nickname. In many Canadian provinces, including Ontario, hydroelectric power is so common that "hydro" has become synonymous with electric power regardless of the actual source of the electricity.

The Bruce B nuclear generating station.

In the late 1950s, the corporation became involved in development, design and construction of CANDU nuclear power stations.

In 1965, the first commercial sized station came on line at Douglas Point.

The Bruce Nuclear Generating Station became the largest nuclear generating station in the world in 2011 (and has remained the largest) by net electrical power rating, total reactor count, and number of operational reactors.

The last nuclear plant to be built in Ontario, Darlington Nuclear Generating Station, was planned in the 1970s. Construction started in 1981, but because of a series of political decision to delay construction, construction took an inordinately long time. Costs continued to mount during the delay and the plant was completed in 1993. This delay in the schedule caused the projected costs to increase tremendously, from an initial projected cost of $7.0 billion to $14.5 billion. The delay accounted for seventy percent of the cost increase.[28]

The quality of Hydro's management, given its size and scope of operations, had long been a concern. In 1922, Dougall Carmichael, then Minister without Portfolio, announced to the Legislature that he was quitting his position as Commissioner because Hydro "was either inefficient or dishonest." He was forced to retract the allegation of dishonesty.[29]

In the 1970s, controversy arose relating to Hydro's expansion strategy, and several inquiries were held:

In the 1980s there were large increases in the rates charged, arising from:

In 1989, Ontario Hydro published a four-volume study, forecasting up to the year 2014, entitled Providing the Balance of Power, with different scenarios attempting to address the need for additional facilities to replace aging electricity generation stations. This was derailed when electricity consumption declined due to the recession of the early 1990s.

The fair value of its assets was substantially less than the $39.6 billion reported in the 1999 financial statements and therefore, in order to ensure the successor entities were financially solvent, the reorganization gave rise to $19.5 billion of stranded debt.[41] The stranded debt was the shortfall between the fair value of Ontario Hydro's assets and the value of Ontario Hydro's total debt and other liabilities transferred to the new entities.[42]

As of March 31, 2014, the remaining stranded debt was $2.6 billion.[47] Beginning in 2016, the Ontario government removed the Debt Retirement Charge from residential electricity users’ electricity bills, and from all other electricity users’ bills until April 1, 2018.[47]