The State of New York did not establish a state police force until the early twentieth century. In part this reflected the pattern of settlement across a wide frontier. A number of proposals to create such a force during the early 1900s, but faced considerable opposition from trade union interests. They feared the police would be used against union organizing, as was happening in several other states.[3]

Following the 1913 murder of Sam Howell, a construction foreman in Westchester County, and failure of the local police to arrest suspects he had named before his death, the New York State Legislature passed a bill to establish a state police force. The New York State Police was officially established on April 11, 1917.

The division's first superintendent was George Fletcher Chandler, who was appointed by Governor Charles S. Whitman. Chandler is credited with much of the division's early organization and development. Chandler coined the term "New York State Troopers." He was an early advocate of officers carrying their weapons exposed on a belt, which was not common practice at the time.[citation needed]

On January 1, 1980, the Long Island State Parkway Police merged with the state police; this resulted in the official establishment of Troop L. In October 1997, the New York State Capital Police was consolidated and absorbed into the state police.

Since February 1994, the agency has accepted DNA evidence for forensic investigation and analysis. The New York State Police Forensic Investigation Center (FIC) opened in November 1996. The Crime Laboratory performs DNA analysis for state investigations and for local law enforcement. It includes a new DNA Data Bank Section that compiles DNA records from violent felons sentenced to prison in New York State. These records can be searched and compared by computer to other evidence collected in unsolved crimes.[4]

Since the establishment of the New York State Police, 140 troopers have died while on duty.[7] 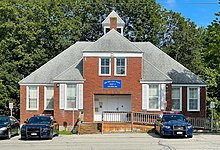 The NYSP divides New York state geographically into eleven "Troops," each comprising a specific geographic area, usually several counties. Each is supervised by a "Troop Commander" usually of the rank of Major.[8] NYSP Troops cover the following counties and regions as listed:

Each Troop encompasses 2–4 "Zones" which are referred to simply by a Zone number. There are up to several "sub-stations" located within each zone.

Trooper uniforms are made of grey wool, with the exception of the Gore-Tex jacket. Prior to 1958, uniforms (shirts, jackets and britches) were woven of equal parts white fiber and black fiber to symbolize the impartiality of justice.[citation needed] The NYSP do not wear a badge on their uniform shirts.[10][self-published source?]

The New York State Police is one of only five state police agencies in the United States that, as of 2019, does not equip its state police vehicles with dashboard cameras. New York State Troopers starting on April 5, 2021 have started receiving body-worn cameras.[12] 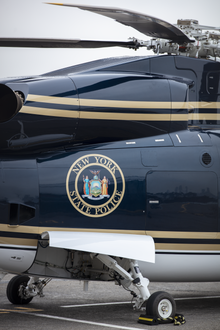