Skip to content
National library and archive of Canada

Library and Archives Canada (LAC; French: Bibliothèque et Archives Canada) is the federal institution, tasked with acquiring, preserving, and providing accessibility to the documentary heritage of Canada.[9] The national archive and library is the fifth largest library in the world. The LAC reports to the Parliament of Canada through the Minister of Canadian Heritage. 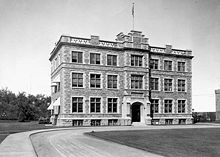 The Dominion Archives was founded in 1872 as a division within the Department of Agriculture tasked with acquiring and transcribing documents related to Canadian history. In 1912, the division was transformed into an autonomous organization, Public Archives of Canada, with the new responsibility of managing government documents on all types of media.[11] The organization would be renamed in 1987 as the National Archives of Canada.[11]

With the efforts of people like Freda Farrell Waldon, the first president of the Canadian Library Association,[12][13] the National Library of Canada was founded in 1953.[11]

In June 2004, LAC issued a discussion paper titled Creating a New Kind of Knowledge Institution;[18] after consultation in June 2006, it issued LAC Directions for Change, a document setting out five key directions to define the new institution, including being a new kind of knowedge institution; becominga truly national institution, a collaborative institution that works to stregnthen Canada's documentary heritage; a learning destsination; and an institution in government information management.[19]

LAC's modernization policy provides for transformation from an institution focused on the acquisition and preservation of analogue (non-digital) materials to one that excels in digital access and digital preservation.[20] A Documentary Heritage Management Framework developed in 2009 seeks the right balance between resources dedicated to analogue and digital materials and is based on:

Eight pilot research projects were initiated to validate the framework, including projects on military documentary heritage, aboriginal documentary heritage, and stewardship of newspapers in a digital age.[21][22][23] In March 2010 LAC issued its final report on Canadian Digital Information Strategy stakeholder consultations initiated in accordance with its mandate to facilitate co-operation among Canadian knowledge communities.[24] In the same month it issued Shaping Our Continuing Memory Collectively: A Representative Documentary Heritage, a document which outlines how it plans to achieve its modernization objectives.[25]

Despite LAC's stated objectives of continuing to fulfill its mandate by adapting to changes in the information environment and collaboration with others, the actual experience since 2004 has been a reduction in both services and collaboration.[20][21][26] Federal funding cuts since 2004 have also impacted on LAC services and acquisitions.[27][28][26][29][30] A detailed timeline of relevant developments and the decline in LAC services since 2004 has been compiled by the Ex Libris Association.[31]

Following the announcement in the 2012 federal budget of a CDN$9.6 million funding cut over the three years commencing in 2012–13,[32] more than 400 LAC employees received notices which indicated their jobs may be affected and the department announced a 20% reduction of its workforce of about 1,100 over the following three years.[33][34][35][36] The "harsh" wording of a 23-page code of conduct for employees effective January 2013, which "spells out values, potential conflicts of interest and expected behaviours", has been criticized by the Association of Canadian Archivists and the Canadian Association of University Teachers among others. The code describes personal activities including teaching and speaking at or attending conferences as "high risk" activities "with regard to conflict of interest, conflict of duties and duty of loyalty" and participation in such activities is subject to strict conditions. In a section on duty of loyalty, it also cautions employees about expressing personal opinions in social media forums. Only authorized LAC spokespersons may issue statements or make public comments about LAC's mandate and activities, which includes controversial changes related to modernization and budget cuts.[37][38][39][40]

Changes introduced under the management of Ian E. Wilson and Daniel J. Caron have been the subject of controversy and public criticism.[26][41] Caron asserted that radical change is needed to cope with the influx and demand for digital material and they are subject to federal budget constraints.[40][42]

Several individuals and organizations voiced concerns about these changes. In 2011, the Canadian Association of University Teachers launched the Save Library & Archives Canada campaign.[43] On May 2, 2012, the Canadian Library Association expressed concern about budget cuts to libraries, both in federal departments and at LAC.[35][36] In August 2012, the Bibliographical Society of Canada wrote to every Member of Parliament urging them to ensure budget cuts do not compromise LAC's legislated mandate. In a follow-up letter to Heritage Minister James Moore in November 2012, the Society singled out the termination of interlibrary loans as a particularly harmful decision.[44] Bibliophile blogger Nigel Beale characterizes LAC as "Canada's national disgrace" in his blog Literary Tourist.[45] Academic Ian Milligan describes LAC's "rhetoric of modernization" as a "smokescreen" for cutting services in light of the insignificance of and limited accessibility to LAC's online collections on the ActiveHistory.ca website.[46] Historian Valerie Knowles outlines the impact of government cutbacks at LAC and federal government libraries in her article "Closing doors on Canada's history" on the iPolitics website.[47]

On May 31, 2012, the Association of Canadian Archivists announced its withdrawal from forums of LAC's Pan-Canadian Documentary Heritage Network, stating that it does not believe the network can meet the needs and interests of archives across Canada previously met by the National Archival Development Program abruptly terminated by LAC following the 2012 federal funding cut.[29][30][48]

Following Caron's resignation in May 2013, a stakeholder coalition issued a joint statement on the qualities of a successful Librarian and Archivist of Canada for official consideration in what they consider a "matter of great national significance":[41][49]

A broad coalition of Canadian stakeholder organizations has developed the following list of qualities we believe the Librarian and Archivist of Canada should have in order to be successful in this critical position of public trust and responsibility. We believe it is essential that the person appointed to this position at this time possess the necessary qualities to meet the tremendous challenges of dealing with the complex issues of the digital environment in an era of limited financial and human resources and the demands of providing increased public access to the irreplaceable treasures of Canadian documentary heritage.

In June 2013 the Heritage Minister said speeding up the digitization of records will be a priority for the new Librarian and Archivist of Canada. Moore also said he will ask the person appointed to revisit the termination of the National Archival Development Program.[29][30]

During the Canadian Truth and Reconciliation Commission, Library and Archives Canada initially failed to produce records requested by the commission in a timely and comprehensive manner and was ordered by an Ontario Superior Court judge to do so.[50] Ultimately, LAC did provide the records, but many were not in digitized and searchable formats as required by the commission.[51]

The Calls to Action of the final report of the Truth and Reconciliation Commission explicitly referenced Library and Archives Canada as follows:

We call upon Library and Archives Canada to: fully adopt and implement the United Nations Declaration on the Rights of Indigenous Peoples and the United Nations Joinet-Orentlicher principles, as related to Aboriginal peoples' inalienable right to know the truth about what happened and why, with regard to human rights violations committed against them in the residential schools; ensure that its record holding related to residential schools are accessible to the public; [and] commit more resources to its public education materials and programming on residential schools.[52][53]

Library and Archives Canada has begun to address these concerns by dedicating funding to hire Indigenous archivists, build relationships with Indigenous communities, and support digitization efforts.[54] However, Indigenous-led organizations have drawn attention to the fact that Indigenous communities have been conducting this type of work for decades.[55]

LAC also holds and provides access to archival copies of the websites of organizations related to the TRC, in collaboration with the National Centre for Truth and Reconciliation,[56] the University of Winnipeg Library, and University of Manitoba Libraries.[57]

The building at 395 Wellington Street in downtown Ottawa is the main physical location where the public may access the collection in person. The building was officially opened on June 20, 1967.[58][59] With the de-emphasis on physical visits, in-person services have been curtailed—for example, since April 2012, reference services are by appointment only—and the role of this building is decreasing.[60][61][33] There are also administrative offices in Gatineau, Quebec, and preservation and storage facilities throughout Canada for federal government records.[58][62][63][64]

The Preservation Centre in the city centre of Gatineau, about 10 kilometres away from the Ottawa headquarters, was designed to provide a safe environment for the long-term storage and preservation of Canada's valuable collections. It was built at a cost of CDN$107 million, and the official opening took place on June 4, 1997. It is a unique building containing 48 climate-controlled preservation vaults and state-of-the-art preservation laboratories.[63][65][66][67] In 2000, the Royal Architectural Institute of Canada named it one of the top 500 buildings constructed in Canada during the last millennium.[68]

A Nitrate Film Preservation Facility on the Communications Research Centre campus in Shirleys Bay, on the outskirts of Ottawa, houses Canada's cellulose nitrate film collection.[69] The collection contains 5,575 film reels dating back to 1912, including some of the first Canadian motion pictures and photographic negatives.[62][70] The film material is highly sensitive and requires precise temperatures for its preservation. The state-of-the-art facility, which was officially opened on June 21, 2011,[71] is an eco-designed building featuring an environmentally friendly roof that provides better insulation and minimizes energy expenditures.[72]

A planned key activity for 2013–14 was to rehouse analogue (non-digital) information resources in a new state-of-the-art high-density storage facility in Gatineau, where the national newspaper collection and records of Second World War veterans will be stored.[7][73] The facility will feature a high bay metal shelving system with a suitable environment to better protect Canada's published heritage.[74][75][76] In January 2019, Library and Archives Canada announced that negotiations for a new facility to be built next to the existing one in Gatineau were starting, with an opening date in 2022.[77]

LAC's online collection is accessible via its website and LAC provides ongoing information online via its blog, podcasts, the Twitter and Facebook social networking services, the Flickr image-sharing site, and the YouTube video-sharing site. RSS feeds provide links to new content on the LAC website and news about LAC services and resources.[78][79][80] A new modernized website is being developed and is scheduled for completion in 2013, with both new and old websites accessible during the transition period.[81]

Storage units for the institution's microfilm collection at the Library and Archives Canada building.

The Library and Archives of Canada's holdings include:[2]

A photo album of icebergs from the Library and Archives of Canada's collection.

Notable items in the collection include:[62]

The LAC also houses more than a petabyte of digital content.[2][89] Some of this content is available online, primarily books, Canadian theses, and census material—equating to around 5 thousand terabytes of information in electronic format.[78][90] Many items have not been digitized and are only available in physical form.[58] As of May 2013, only about 1% of the collection had been digitized, representing "about 25 million of the more popular and most fragile items."[91][27][28]

Since its inception, LAC has reported to Parliament through the Minister of Canadian Heritage.[92] LAC's stated mandate is:[9][8][93]

LAC is expected to maintain "effective recordkeeping practices that ensure transparency and accountability".[94]

The Librarian and Archivist of Canada has the same seniority level as a deputy minister of a federal department.[8]