Erie County is a county along the shore of Lake Erie in western New York State. As of the 2020 census, the population was 954,236.[1] The county seat is Buffalo, which makes up about 28% of the county's population.[2] Both the county and Lake Erie were named for the regional Iroquoian language-speaking Erie tribe of Native Americans, who lived in the area before 1654. They were later pushed out by the more powerful Iroquoian nations tribes.

Erie County, along with its northern neighbor Niagara County, makes up the Buffalo-Niagara Falls metropolitan area, the second largest in New York State behind New York City. The county's southern part is known as the Southtowns.[3] The county has seen one of the highest growth rates of any county in New York State from the 2010 to 2020 census.

When counties were established by the English colonial government in the Province of New York in 1683, present-day Erie County was part of Indian territory occupied by Iroquoian-speaking peoples. It was administered as part of New York colony. Significant European-American settlement did not begin until after the United States had gained independence with the end of the American Revolutionary War in 1783. They forced the Iroquois to cede most of their lands, as many had been allies of the British. ["They" ambiguous; reference required]

About 1800, the Holland Land Company, formed by Americans and Dutch associates, extinguished Indian claims by purchasing the land from New York, acquired the title to the territory of what are today the eight westernmost counties of New York, surveyed their holdings, established towns and began selling lots to individuals. The state was eager to attract settlers and have homesteads and businesses developed. At this time, all of western New York was included in Ontario County.

As the population increased, the state legislature created Genesee County in 1802 out of part of Ontario County. In 1808, Niagara County was created out of Genesee County. In 1821, Erie County was created out of Niagara County, encompassing all the land between Tonawanda Creek and Cattaraugus Creek.[4] The first towns formed in present-day Erie County were the Town of Clarence and the Town of Willink. Clarence and Willink comprised the northern and southern portions of Erie county, respectively. Clarence is still a distinct town, but Willink was quickly subdivided into other towns. When Erie County was established in 1821, it consisted of the towns of Amherst, Aurora, Boston, Clarence, Collins, Concord, Eden, Evans, Hamburg, Holland, Sardinia and Wales.

The county has a number of houses and other properties listed on the National Register of Historic Places listings in Erie County, New York.[5]

In 1861, the hamlet of Town Line in the Town of Lancaster voted 85–40 to secede from the Union.[6] Town Line never sought admission into the Confederate States of America and there is no evidence that men from the community ever fought for the Confederacy. Some reporting from that time indicates the vote was a joke. On January 24, 1946, as part of a nationally reported event, Town Line voted to officially return to the Union after 85 years of Union secession.[7]

Erie County is in the western portion of upstate New York, bordering on the lake of the same name. Part of the industrial area that has included Buffalo, it is the most populous county in upstate New York outside of the New York City metropolitan area. The county also lies on the international border between the United States and Canada, bordering the Province of Ontario.

The northern border of the county is Tonawanda Creek. Part of the southern border is Cattaraugus Creek. Other major streams include Buffalo Creek (Buffalo River), Cayuga Creek, Cazenovia Creek, Scajaquada Creek, Eighteen Mile Creek and Ellicott Creek. The county's northern half, including Buffalo and its suburbs, is known as the Northtowns and is relatively flat and rises gently up from the lake. The southern half, known as the Southtowns,[3] is much hillier. It has the northwesternmost foothills of the Appalachian Mountains. The highest elevation in the county is a hill in the Town of Sardinia that tops out at around 1,940 feet (591 m) above sea level. The lowest ground is about 560 feet (171 m), on Grand Island at the Niagara River. The Onondaga Escarpment runs through the northern part of Erie County. 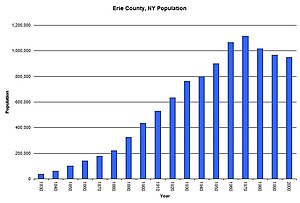 Plans to merge Erie County with the City of Buffalo have been suggested, which proponents say would eliminate much of the extensive bureaucracy and political and municipal subdivisions among the various towns, cities and villages in the county. The result would be a consolidated city-county controlled by a single government, effectively making Buffalo's borders and population contiguous with that of Erie County's. These plans have proven controversial; there is controversy on the impact of the city's debt on a regional government. Concerns have also been raised that a regional government would dilute minority representation in government.[16]

Prior to 1936, Erie County predominantly backed Republican Party candidates, with only four Democratic Party candidates winning the county in a presidential election - James Buchanan in 1856, George B. McClellan in 1864, Grover Cleveland in 1892 and Woodrow Wilson in 1912. However, starting with the 1936 election, it has turned predominantly Democratic since then, with only two Republicans carrying the county in a presidential election-- Dwight D. Eisenhower in 1952 and 1956 and Richard Nixon in 1972, with Nixon being the most recent. In 2016, like many other counties in the Rust Belt, Donald Trump drastically expanded the Republican vote share thanks to his appeal to working-class whites and Ethnic-Catholic voters. Four years later, in 2020, Joe Biden won 267,270 votes in Erie County, more than Barack Obama in 2008. Biden's margin of victory, however, was smaller than Obama's 2008 victory within the county.

Erie County is home to three professional teams—the NFL's Buffalo Bills, the NHL's Buffalo Sabres and the NLL's Buffalo Bandits, along with Division I's Buffalo Bulls and MILB's Buffalo Bisons. The city of Buffalo also features the Buffalo Zoo, Buffalo and Erie County Historical Society, Burchfield-Penney Art Center and Albright-Knox Art Gallery (all located within a mile of each other in the Delaware Park System), Buffalo and Erie County Botanical Gardens and Buffalo Museum of Science, in addition to tourist districts such as Canalside and Larkinville. The Erie County Fair, held every August in the Town of Hamburg from 1820 to 2019 (the 2020 event, like much everything else across the country, was cancelled due to the COVID-19 pandemic), is one of the largest county fairs in the United States.[21]

The Erie County Department of Parks, Recreation and Forestry was established in 1925 with four parks spanning 2,280 acres (9.2 km2). As of 2003, the county managed 38 properties, totaling approximately 11,000 acres (45 km2) of land. Management objectives include providing and maintaining recreational space and the conservation of the county's natural and historic resources.[22] A 2003 Master Plan identified several broad categories of parks operated by the county, including heritage parks, waterfront parks, conservation parks, special purpose parks and forest management areas.[22]

Erie County's heritage parks include the five original county parks that were established during the 1920s and 1930s. These parks are examples of multiple-use sites with significant scenic, natural and historic features. Each park has unique man-made structures of historical character, many constructed as part of the Works Progress Administration movement in the 1930s.[23] 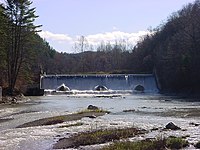 These largely-undeveloped parks are managed primarily for conservation of the natural environment and passive nature-based outdoor recreation activities. These lands are intended to generally remain in a natural state.[23]

Forest management areas are managed by the Erie County Bureau of Forestry, which was established in 1927. These areas include several thousand acres of mostly-coniferous plantation style forest, much of which was planted on abandoned farmland by the Civilian Conservation Corps in the 1930s. These areas are located mostly in the rural southern portion of the county.[24] These lands have limited recreation potential, mostly in the form of trails. Management of these lands is focused on natural resource conservation, in addition to potential commercial resource extraction of timber products or maple syrup.[23][24]

‡ - Not Wholly in this County 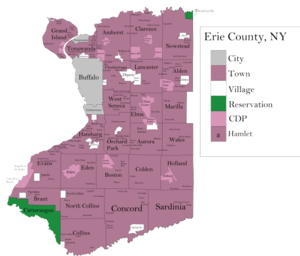