Eastman is a city in Dodge County, Georgia, United States. The population was 4,962 at the 2010 census.[5] The city was named after William Pitt Eastman, a native of Massachusetts who purchased a large tract of land along the Macon to Brunswick Railroad, and settled a city on the site.

In the 19th century, this was a center of the timber and sawmill industry. During the Great Depression in 1937, the first Stuckey's Pecan Shoppe, once well-known along roadways throughout the United States, was founded in Eastman.

The first permanent settlement of the area took place in 1840.[6] The population continued to grow when, in 1869, a station was built for the newly constructed Macon and Brunswick Railroad which passed through the area, stimulating an economic boom. The settlement was originally named Levison and was renamed Eastman by December 1869. Eastman was designated as the seat of newly formed Dodge County in 1871. It was incorporated as a town in 1873 and as a city in 1905.[7] Eastman is named for W. P. Eastman, who, with W. E. Dodge, presented the county with a courthouse.[8]

During that same time period, Ira Roe Foster, former Quartermaster General of Georgia, operated a sawmill in Dodge County. In 1869, Foster built a residence in what would become Eastman. Foster was one of many who came to the area to participate in the timber and sawmill boom.

During the boom, it was estimated that, on average, there was one mill every two miles along the industrial corridor created by the Macon and Brunswick Railroad.[9] Unlike earlier eras, when timber was transported downstream in large river rafts, sawmills along the industrial corridor shipped their timber by rail. In his book The New South Comes to Wiregrass Georgia 1860-1910, author Mark V. Wetherington states: "Ira R. Foster shipped lumber to Brunswick, where it was loaded onto timber schooners and transported to international markets like Liverpool, Rio de Janeiro, and Havana."[9] When Eastman was incorporated in 1872, Foster served as its first mayor.[10]

In the early years of the 20th century, racial tensions increased between the white and black communities in and about Eastman, resulting in a number of documented lynchings. In one instance, a man misidentified as the rapist Ed Claus was murdered before the real Claus was identified, apprehended, and lynched.[11] In 1919, rumors that local blacks were intending to rise up and exterminate white residents, led to the murder of Eli Cooper and the burning of several black churches, which were believed to be the focal point of the uprising.[12]

There were 2,154 households, out of which 27.2% had children under the age of 18 living with them, 37.9% were married couples living together, 19.9% had a female householder with no husband present, and 38.8% were non-families. 35.5% of all households were made up of individuals, and 15.5% had someone living alone who was 65 years of age or older. The average household size was 2.28 and the average family size was 2.96.[citation needed]

Eastman has few recreational activities. The Dodge County Golf Club has a 9-hole golf course, a swimming pool and private golf cart selection. It is positioned next to the railroad tracks that run through the town. It also has a public baseball field located at the former Boys & Girls Club. The Eastman-Dodge County Recreational Fields, located along the Eastman-Dublin Highway (Highway 117), offers the following public sports for kids: football, baseball, tee ball, cheerleading, and soccer.

Dodge County students in kindergarten to twelfth grades are in the Dodge County School District, which consists of a pre-K school, two elementary schools, a middle school, and a high school.[19][20] The district has 210 full-time teachers and over 3,500 students.[19] 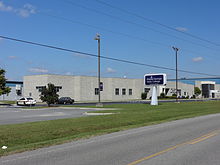 Peabody School, also known as Peabody High School, is an historic school building located on Herman Avenue in Eastman, Georgia.[23] Built in 1938, it was designed by Eastman-born American architect Edward Columbus Hosford, who is noted for the courthouses and other buildings that he designed in Florida, Georgia and Texas. In the days of segregation, it was an all-black public school. It was closed in 1970 and its students were integrated into Dodge County High School and other formerly all-white public schools in Dodge County.

On November 20, 2004, the building was added to the National Register of Historic Places. It was then vacant and in private ownership.