Skip to content
Major library and cultural center in Alexandria, Egypt
This article is about the modern library in Alexandria. For the ancient library founded by the Ptolemaic dynasty, see Library of Alexandria. 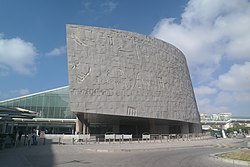 The Bibliotheca Alexandrina (Latin[1] for "Library of Alexandria"; Egyptian Arabic: مكتبة الإسكندرية Maktabet al-Eskendereyya, Egyptian Arabic: [mækˈtæb(e)t eskendeˈɾejjæ]) is a major library and cultural center on the shore of the Mediterranean Sea in Alexandria, Egypt. It is a commemoration of the Library of Alexandria, once one of the largest libraries worldwide, which was lost in antiquity. The idea of reviving the old library dates back to 1974 when a committee set up by Alexandria University selected a plot of land for its new library. Construction work began in 1995, and after some US$220 millions had been spent, the complex was officially inaugurated on 16 October 2002. In 2010, the library received a donation of 500,000 books from the Bibliothèque nationale de France (BnF). The gift makes the Bibliotheca Alexandrina the sixth-largest Francophone library in the world.[citation needed]

Mediterranean side of library

The idea of reviving the old library dates back to 1974 when a committee set up by Alexandria University selected a plot of land for its new library between the campus and the seafront, close to where the ancient library once stood. The recreation of the ancient library was not only adopted by other individuals and agencies, it garnered support from Egyptian politicians. One leading supporter of the project was former Egyptian President Hosni Mubarak; UNESCO was also quick to embrace the concept of endowing the Mediterranean region with a center of cultural and scientific excellence. This initiative by the Egyptian government, UNESCO, and Alexandria University was undertaken "with the aim of re-establishing Alexandria as one of the great intellectual and cultural centres of the twenty-first century".[2][non-primary source needed][non-primary source needed] UNESCO's involvement beginning in 1986 created a great opportunity for the project to truly be international in focus.

UNESCO organized an architectural design competition in 1988 to choose a design worthy of the site and its heritage. The competition was won by Snøhetta, a Norwegian architectural office, associated with Austrian architect Christoph Kapeller and Egyptian architect Ihab El Habbak, among more than 1,400 entries. [3] This architectural team consisted of ten members representing six countries. In addition, UNESCO created an International Commission for the Bibliotheca Alexandrina which consisted of high-level representatives from 18 diverse countries and organizations.[2][non-primary source needed] Given UNESCO’s involvement and the investment by the international community, this project achieved its mission to “play an educational, cultural, and scientific role throughout the region”.[2][non-primary source needed]

The first pledges were made for funding the project at a conference held in 1990 in Aswan: USD $65 million, mostly from the MENA states. Construction work began in 1995 and, after some US$220 million had been spent, the complex was officially inaugurated on 16 October 2002.[4][5][6]

The Bibliotheca Alexandrina is trilingual, containing books in Classical Arabic, English, and French. In 2010, the library received a donation of 500,000 books from the National Library of France, Bibliothèque nationale de France (BnF). The gift makes the Bibliotheca Alexandrina the world's sixth-largest Francophone library. The BA also is now the largest depository of French books in the Middle East and North Africa, surpassing those of Tunisia, Algeria and Morocco, in addition to being the main French library in Africa.[7][non-primary source needed]

The library has shelf space for eight million books,[8] with the main reading room covering 20,000 square metres (220,000 sq ft) on eleven cascading levels. The complex also houses a conference center; specialized libraries for maps, multimedia, the blind and visually impaired, young people, and for children; four museums;[8] four art galleries for temporary exhibitions; 15 permanent exhibitions; a planetarium;[8] and a manuscript restoration laboratory. The library's architecture is equally striking. The main reading room stands beneath a 32-meter-high glass-panelled roof, tilted out toward the sea like a sundial, and measuring some 160 m in diameter. The walls are of gray Aswan granite, carved with characters from 120 scripts.[8]

The collections at the Bibliotheca Alexandrina were donated from all over the world. The Spanish donated documents that detailed their period of Moorish rule. The French also donated, giving the library documents dealing with the building of the Suez Canal.

The BA/IA partnership is built to preserve heritage for future generations and provide universal access to human knowledge. The BA was the site of the first mirror and external backup of the Internet Archive.[9] The Internet Archive donated five million USD to the BA, including:

The BA's mission is to be a center of excellence in the production and dissemination of knowledge and to be a place of dialogue, learning and understanding between cultures and peoples.[11] The Bibliotheca Alexandrina offers several additional such as book fairs, book launches, ceremonies, cinema, competitions, concerts, conferences, educational courses, exhibitions, festivals, forums, lectures, meetings, performances, presentations, reading activities, round table discussions, seminars, shows, theater, training courses, video-conferences and workshops for adults, children, young people and the academic community.[12][13] Here are some of the areas and exhibits that it comprises:

A copy of the Internet Archive

The library provides access to print on demand books via the Espresso Book Machine.[16]

Taha Hussein Library for the Blind and Visually Impaired

The Taha Hussein Library contains materials for the blind and visually impaired using special software that makes it possible for readers to read books and journals. It is named after Taha Hussein, the Egyptian professor of Arabic and literary critic and one of the leading figures of the Arab Renaissance (Nahda) in literature, who was himself blinded at the age of three.[17]

Contains book collections of Nobel Prize Laureates in Literature from 1901 to present.[18] The Nobel Section was inaugurated by Queen Silvia of Sweden and Queen Sonja of Norway on 24 April 2002.[19]

Established in 2001, the BA Antiquities Museum is the first archeological museum to be situated within a library.[21] The primary aims of the museum are to promote research, creativity, and cultural awareness. Holding approximately 1,316 artifacts, the Antiquities Museum collection provides a glimpse into Egyptian history from the Pharaonic era to the conquest of Alexander the Great to the Roman civilizations before the advent of Islam across Egypt. The collection includes underwater antiquities from the Mediterranean seabed near the Eastern Harbour and the Bay of Abukir.[22]

The museum provides descriptions of artifacts in three languages: English, Arabic, and French.

The Manuscript Museum provides visitors and researchers with rare manuscripts and books. Established in 2001, the Manuscript Museum contains the world's largest collection of digital manuscripts.[23] It is an academic institution that is affiliated to the Library of Alexandria. The stated aims of the museum are to preserve heritage, foster human cadres in the conservation and restoration of manuscripts, and create a generation of new restorers.[24][weasel words]

This museum contains many personal belongings of the Egyptian president Anwar Al Sadat. The collections include some of his military robes, his Nobel Prize medal, his copy of the Qur'an, a few of his handwritten letters, pictures of him and his family, and the blood-stained military robe he wore the day of his assassination. The museum also contains a recording in his voice of part of the Qur'an and assorted newspaper articles written about him.[27]

The Culturama hall consists of a huge 180-degree panoramic interactive computer screen with a diameter of 10 meters that is made up of nine separate flat screens arranged in a semicircle and nine video projectors controlled by a single computer. Culturama has enabled the display of information that could never have been displayed clearly using a regular computer display system.[30]

It was developed by the Egyptian Center for Documentation of Cultural, and Natural Heritage (CULTNAT) and holds its patent in 2007.

It displayed three periods from the history of Egypt:

The Digital Assets Repository (DAR) is a system developed at the Bibliotheca Alexandrina (BA) by the International School of Information Science (ISIS) to create and maintain digital library collections and preserve them to future generations,[31] as well as providing free public access to the library's digitized collections through a web-based search and browsing facilities[31][32] via DAR's website.[33]

Per Presidential Decree No. 76 in 2001, the Bibliotheca Alexandria is managed by a Council of Patrons, a Board of Trustees, and a Director.[34] The founding director was Ismail Serageldin, who served until May 2017. He also was chair of the Board of Directors for each BA's affiliated research institutes and museums. He was succeeded by current manager Dr. Moustafa El Feqy.[35][36] The Council of Patrons is composed of a number of world leaders from different parts of the world, numbering not less than eight and no more than twenty-four, to be selected by invitation of the President of Egypt, and one of these shall be the Director-General of UNESCO. The Board of Trustees shall be composed of a number of eminent figures of scientific and intellectual standing or international experience, Egyptians and non-Egyptians. They shall number no less than fifteen and no more than thirty; of whom five shall be ex-officio members of the Egyptian Government, namely: the Minister of Higher Education and Scientific Research, the Minister of Culture, the Minister of Foreign Affairs, the Governor of Alexandria and the President of the University of Alexandria.[37]

The Bibliotheca Alexandrina held a variety of symposiums in 2011 in support of the Egyptian community and emphasizing the 2011 Egyptian Revolution, the Egyptian Constitution and Democratic Government in Arab nations. The library also displays a photo gallery of the January 25, 2011 revolution and works to document it in various formats.[38]

Criticism of the library comes chiefly from two angles. Many allege that the library is a white elephant, unsustainable for modern Egypt, which serves little more than a vanity project for the Egyptian government. Furthermore, there are fears that censorship would affect the library's collection.[39] In addition, the building's elaborate architecture (which imitates a rising Sun) upset some who believed too much money was being spent on construction rather than the library's actual collection. Due to the lack of available funds, the library had only 500,000 books in 2002, a small number compared to other national libraries (however, in 2010, the library received an additional 500,000 books from the Bibliothèque nationale de France.) It has been estimated that it will take 80 years to fill the library at the current level of funding. The library relies heavily on donations to buy books for its collections.[40]