I chose the Corsair AX760 as it is one of the power supply that features a zero RPM mode for its fan under low loads. As the expected load in the layout is low it should be very quiet in normal use.

Gabriel Torres reviewed this on hardware secrets, here is the internal structure of this supply.

As you may assume, the Corsair AX760 uses a completely different internal design from the AX760i. It is manufactured by Seasonic, based on its new KM3 platform. 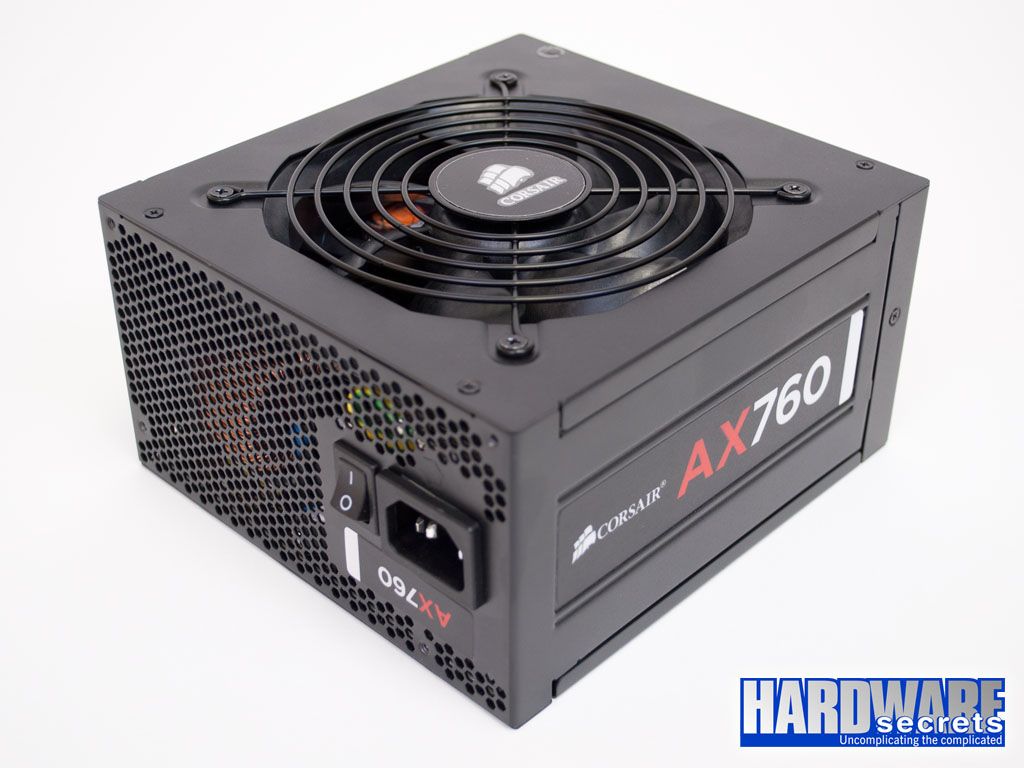 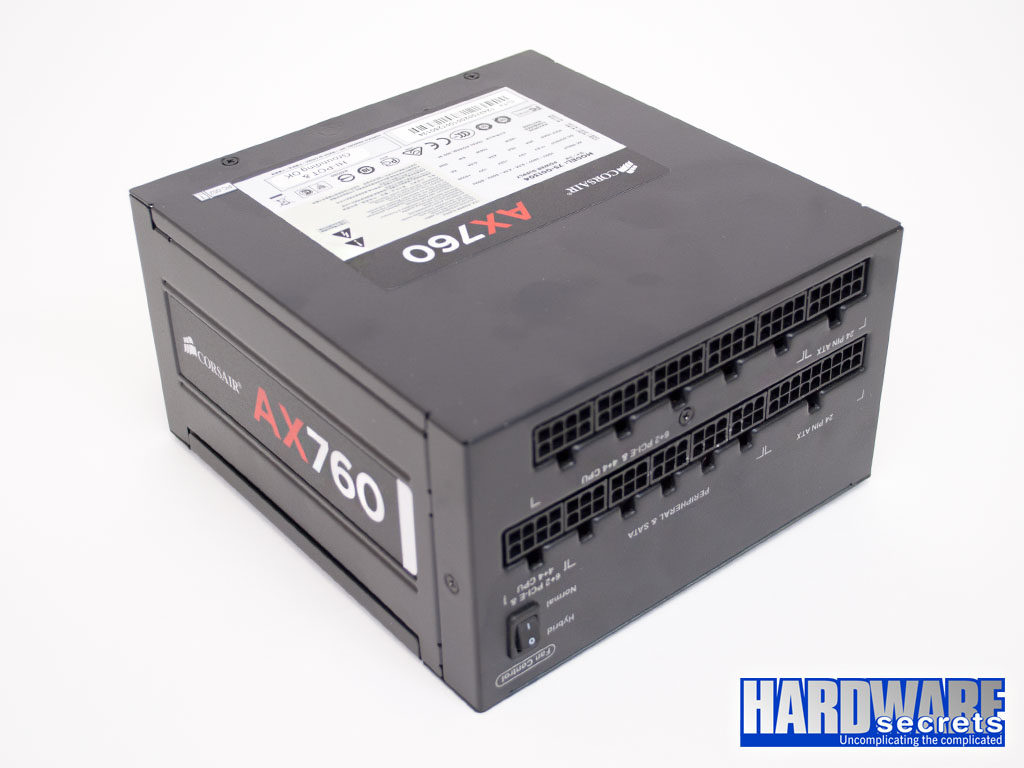 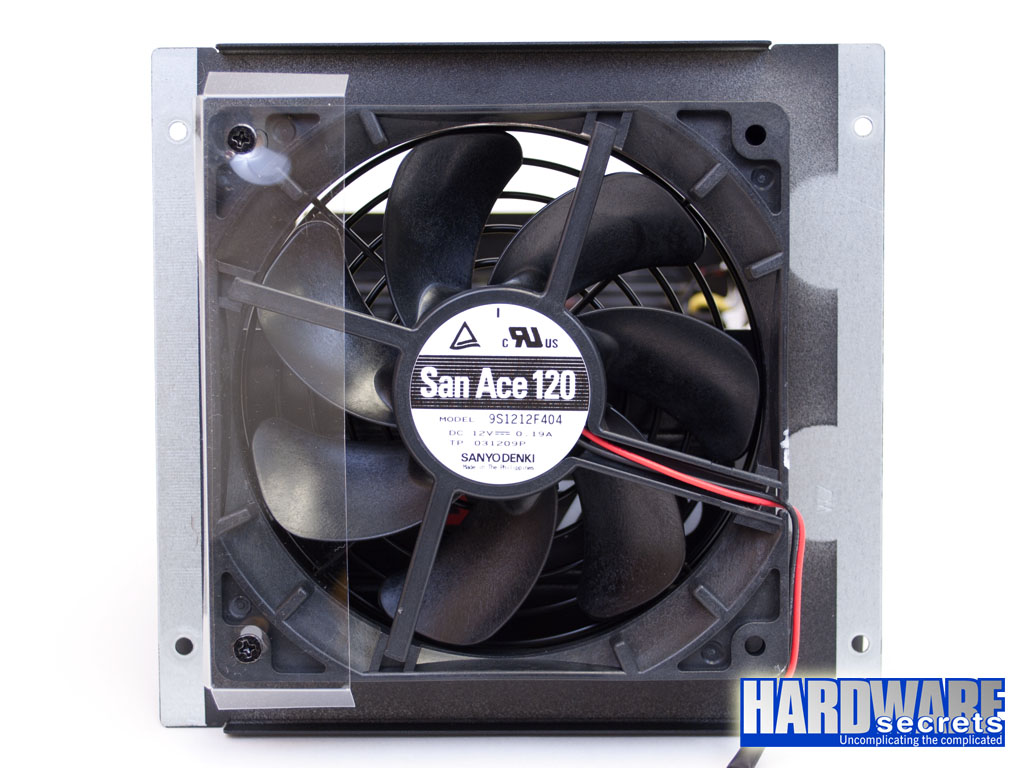 The modular cabling system from this power supply has 13 connectors: two for the main motherboard power connector, six for video card and ATX12V/EPS12V connectors, and five for peripheral and SATA connectors. This power supply comes with the following cables:

This is the same configuration available on the AX760i model.

All wires are 18 AWG, which is the minimum recommended gauge. 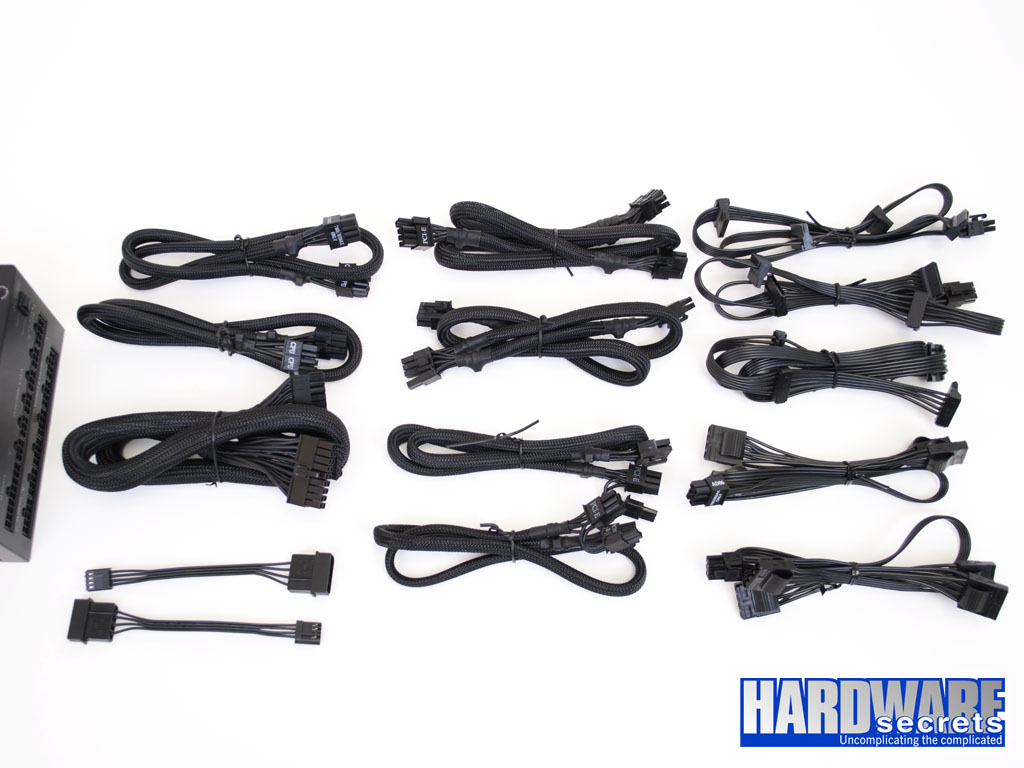 A Look Inside the Corsair AX760

On this page we will have an overall look, and then in the following pages we will discuss in detail the quality and ratings of the components used. 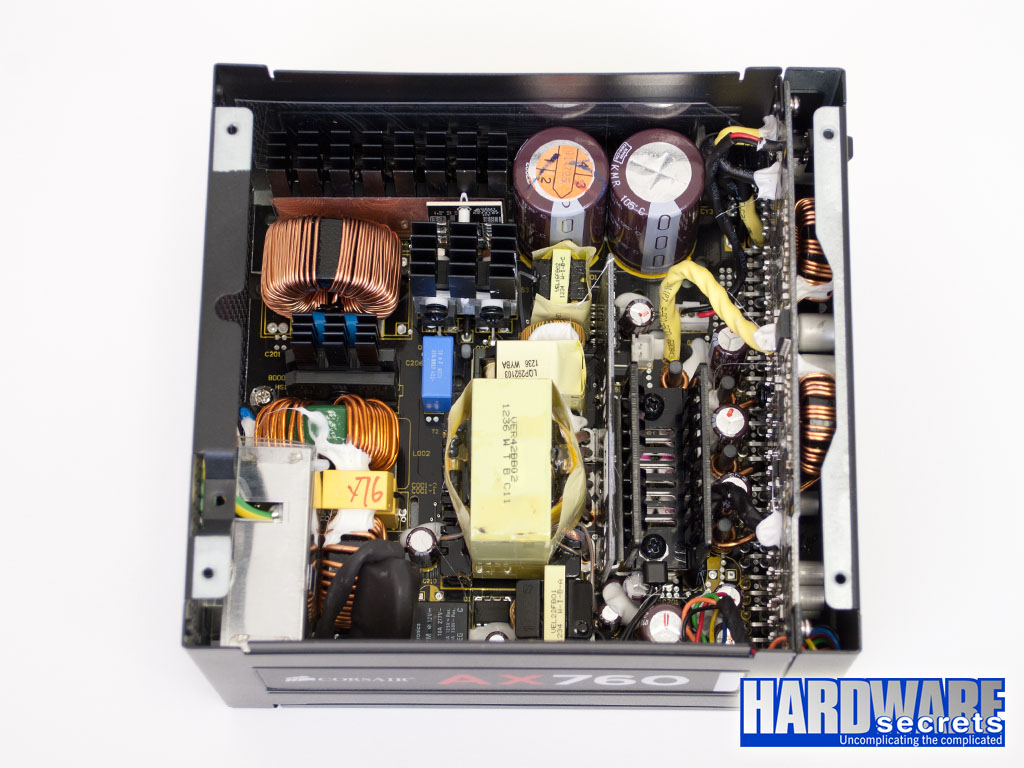 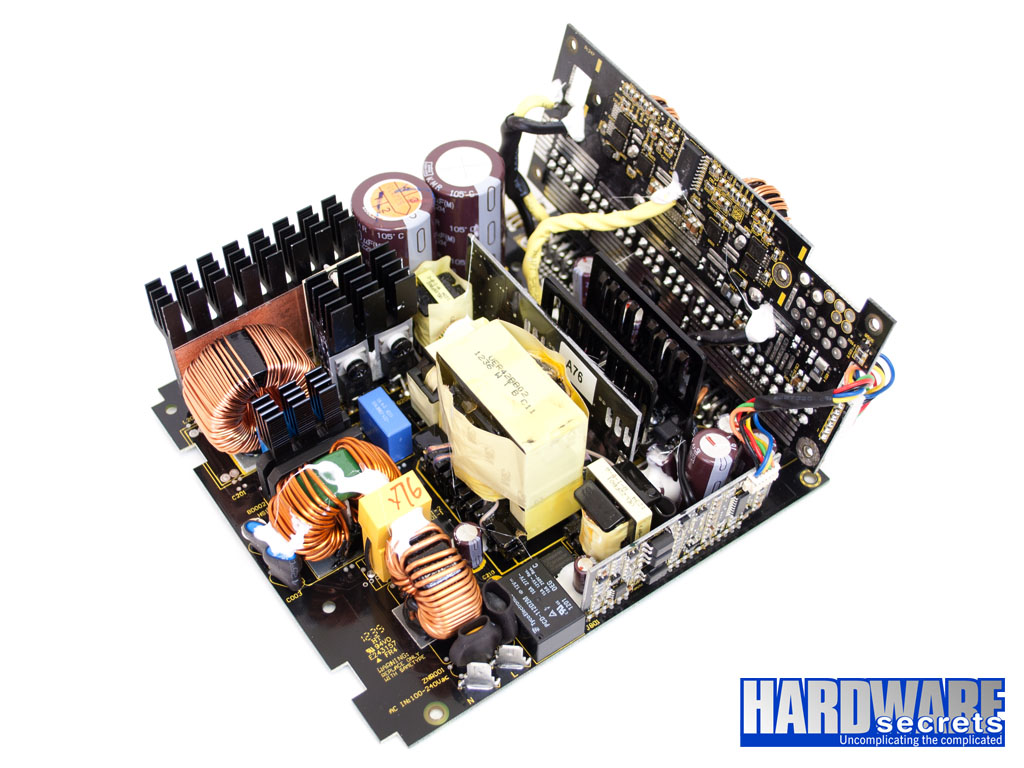 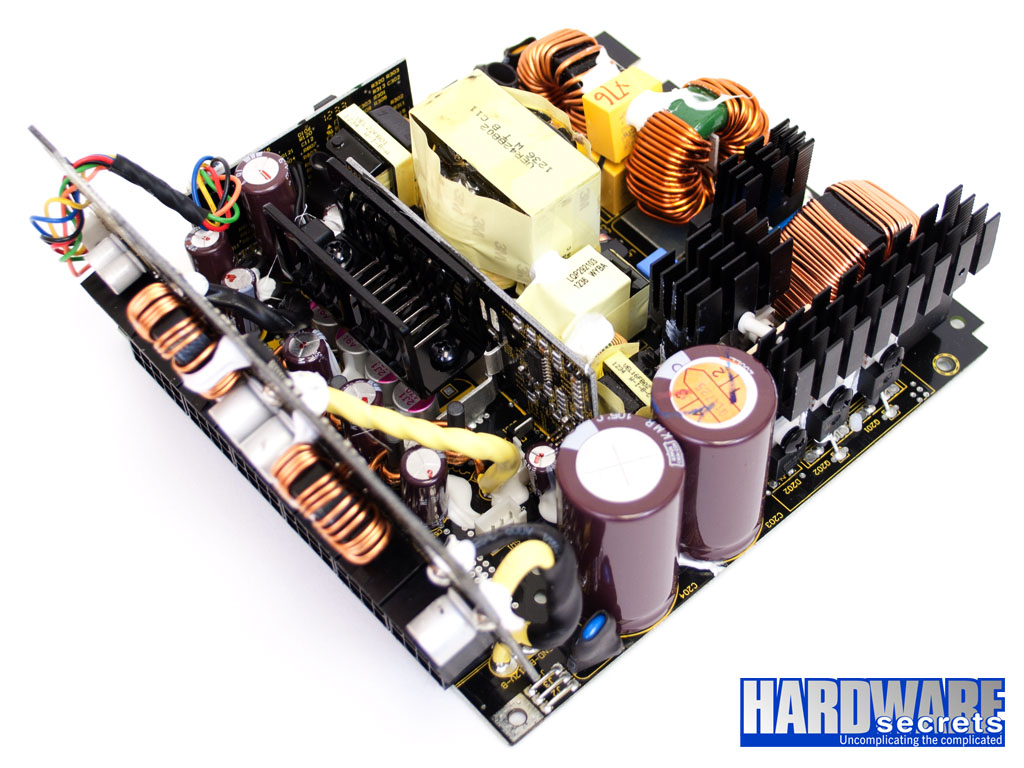 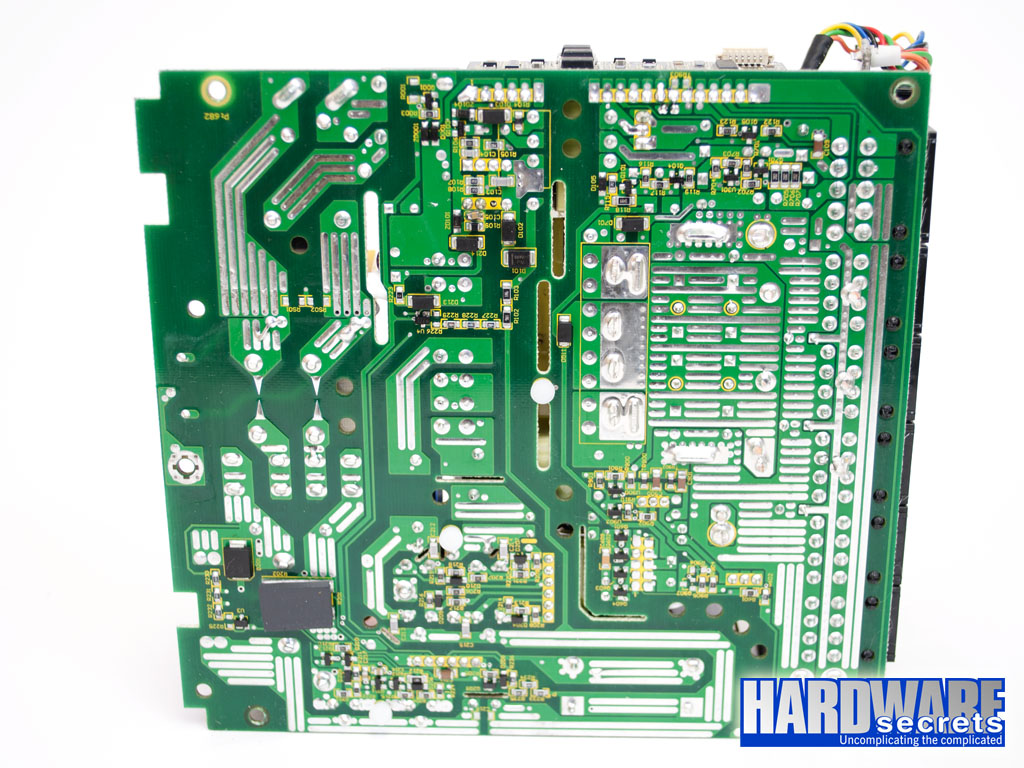 Figure 8: The printed circuit board

As we have mentioned in other articles and reviews, the first place we look when opening a power supply for a hint about its quality, is its filtering stage. The recommended components for this stage are two ferrite coils, two ceramic capacitors (Y capacitors, usually blue), one metalized polyester capacitor (X capacitor), and one MOV (Metal-Oxide Varistor). Very low-end power supplies use fewer components, usually removing the MOV and the first coil.

In the transient filtering stage, this power supply is flawless. 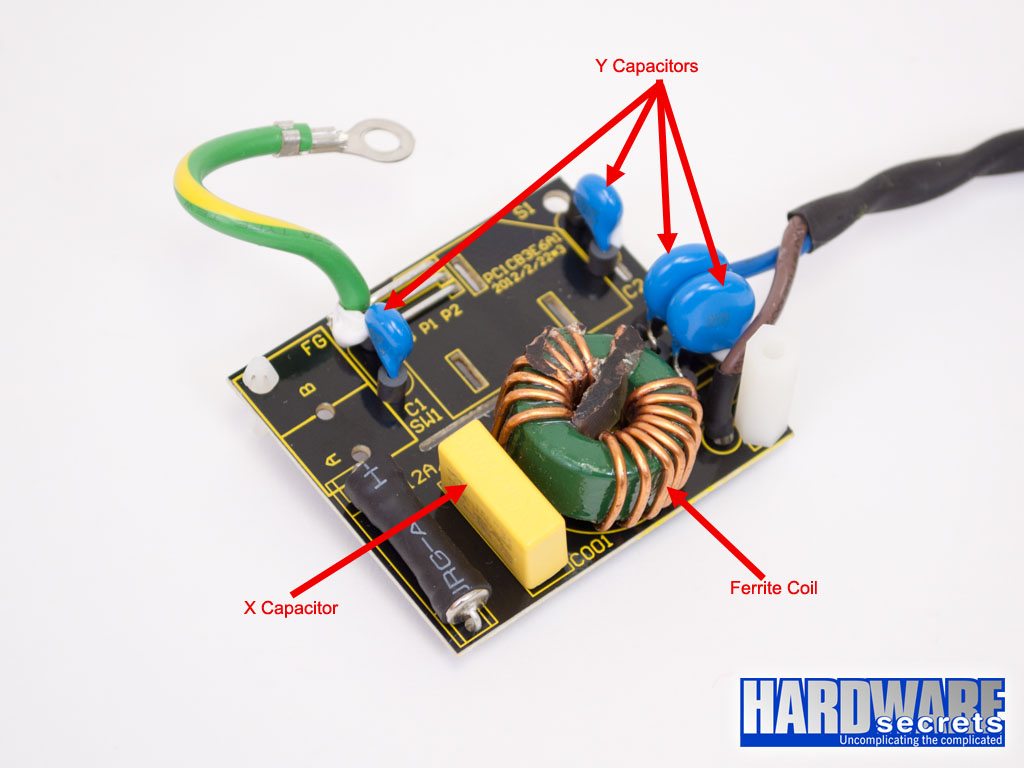 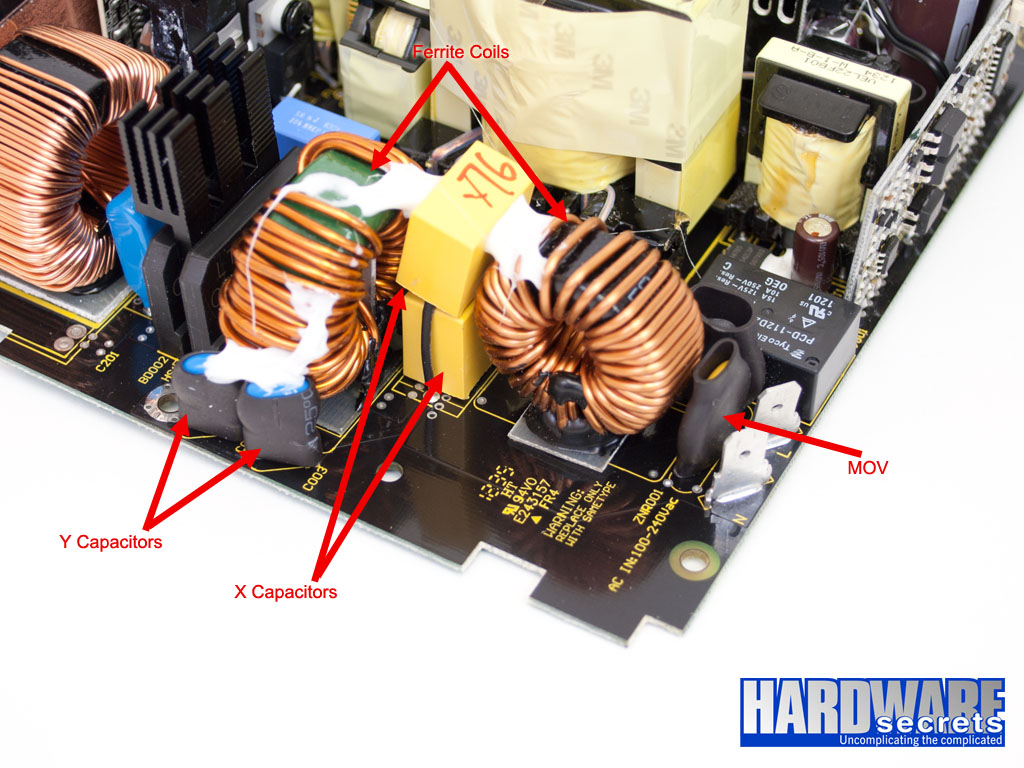 On this page, we will take an in-depth look at the primary stage of the Corsair AX760. For a better understanding, please read our “Anatomy of Switching Power Supplies” tutorial.

This power supply uses two GBJ1506 rectifying bridges, which are attached to an individual heatsink. Each bridge supports up to 15 A at 100° C. In theory, you would be able to pull up to 3,450 W from a 115 V power grid. Assuming 80% efficiency, the bridges would allow this unit to deliver up to 2,760 W without burning themselves out (or 3,105 W at 90% efficiency). Of course, we are only talking about these particular components. The real limit will depend on all the components combined in this power supply. The AX760i version uses a single 25 A bridge here. 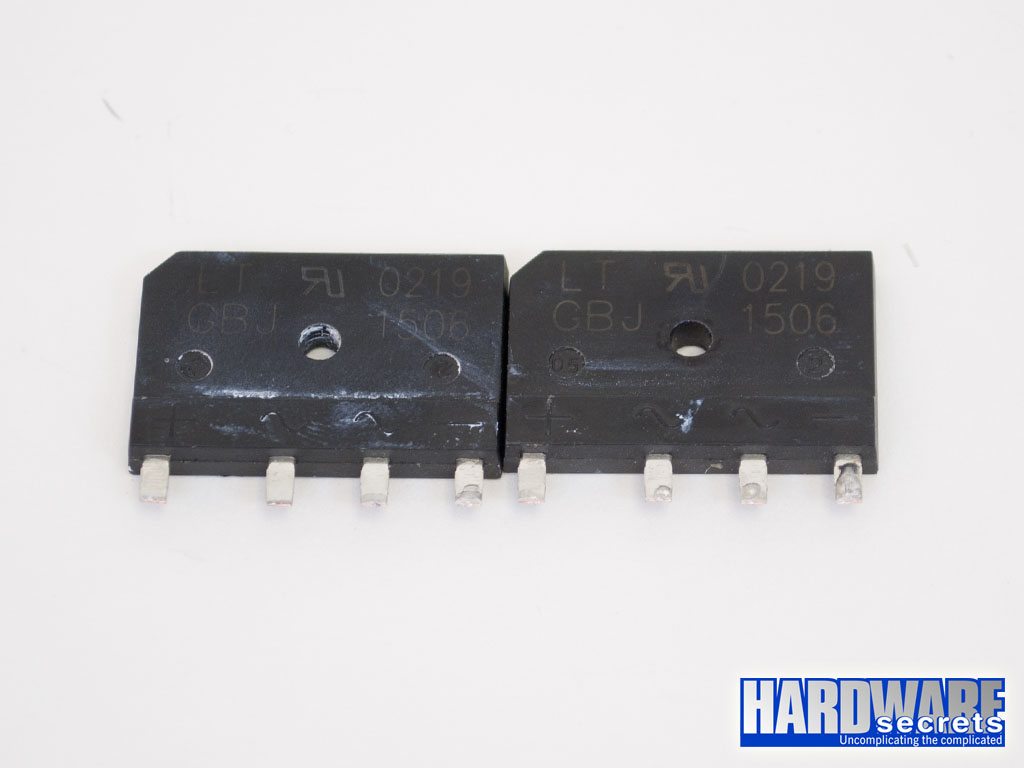 The active PFC circuit uses two IPP60R199CP MOSFETs, each one supporting up to 16 A at 25° C or 10 A at 100° C in continuous mode (note the difference temperature makes), or 51 A at 25° C in pulse mode. These transistors present a 199 mΩ maximum resistance when turned on, a characteristic called RDS(on). The lower the number the better, meaning that the transistor will waste less power, and the power supply will have a higher efficiency. These are the same components used on the AX760i. 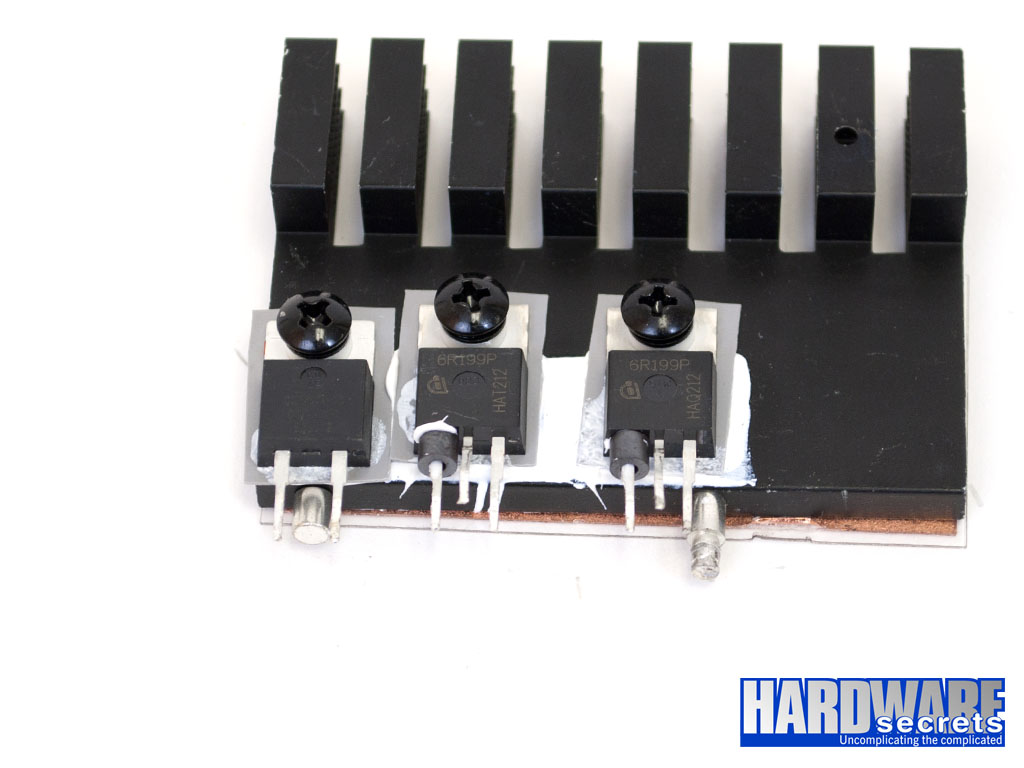 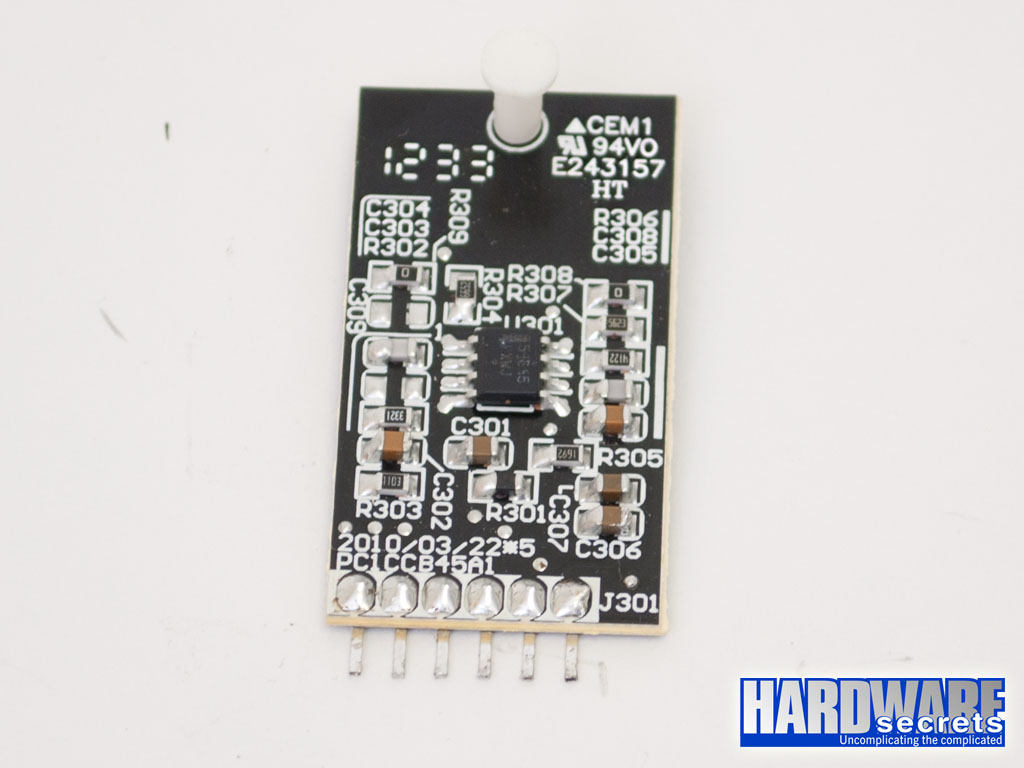 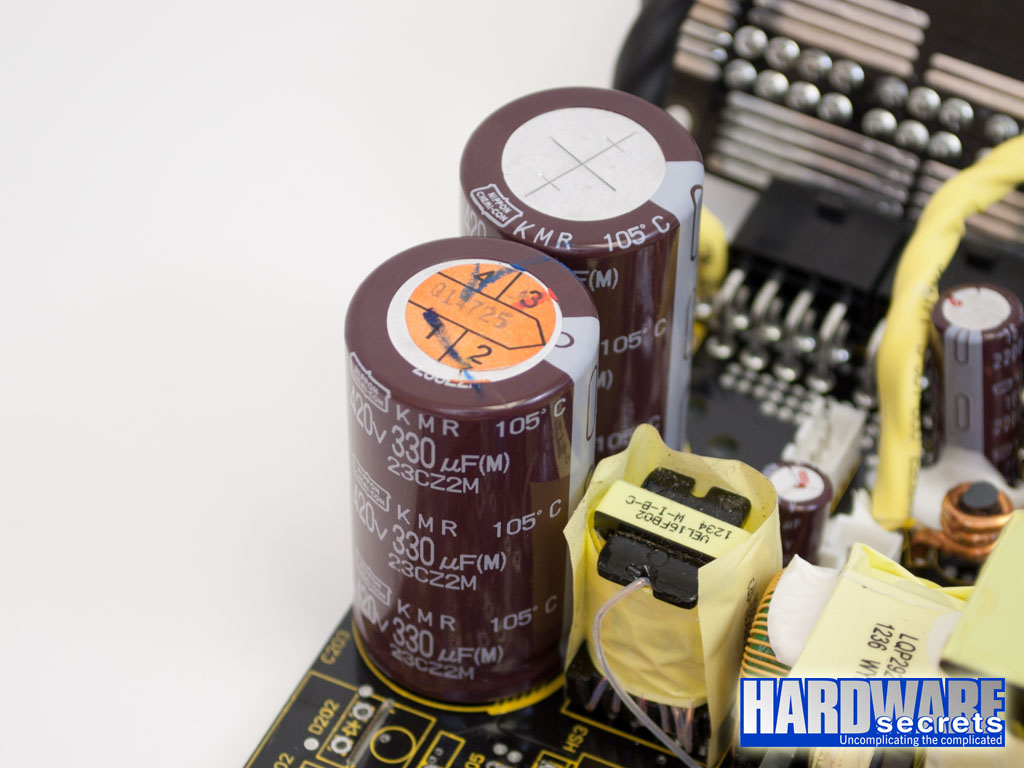 In the switching section, four IPP50R250CP MOSFETs are employed using a full-bridge, resonant configuration. Each transistor supports up to 13 A at 25° C or 9 A at 100° C in continuous mode or up to 31 A at 25° C in pulse mode, with a maximum RDS(on) of 250 mΩ. The AX760i uses a different configuration, with only two stronger transistors. 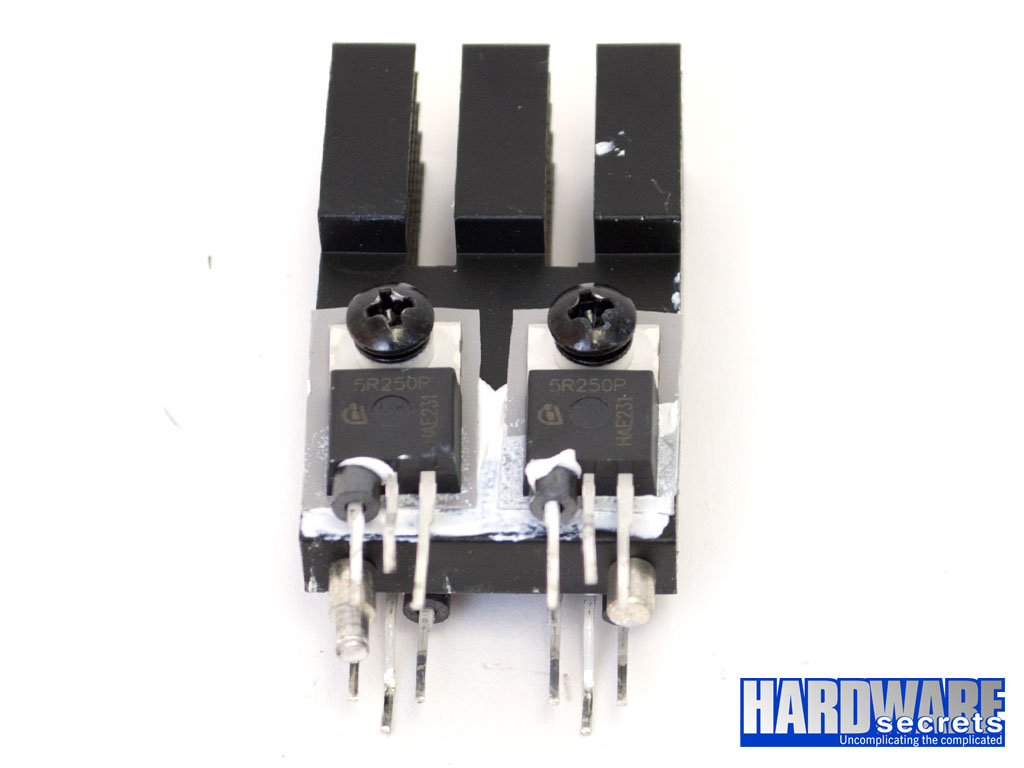 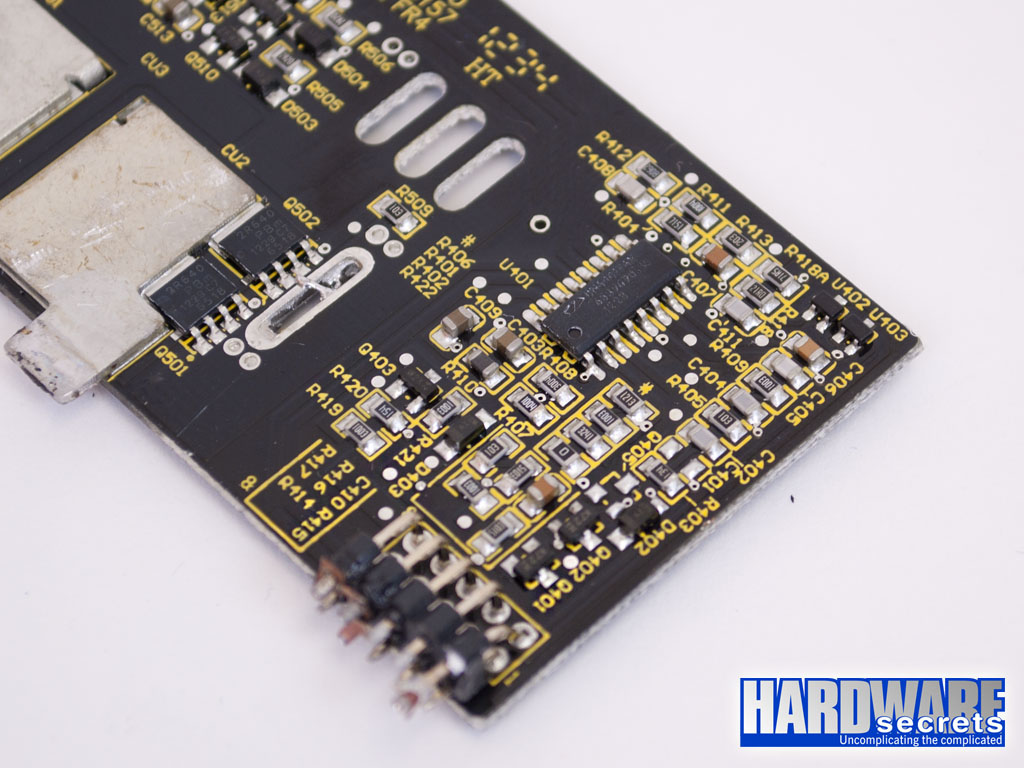 As one would expect in a high-efficiency power supply, the Corsair AX760 uses a synchronous design, where the Schottky rectifiers are replaced with MOSFETs. Also, the reviewed product uses a DC-DC design in its secondary. This means that the power supply is basically a +12 V unit, with the +5 V and +3.3 V outputs produced by two smaller power supplies connected to the main +12 V rail. Both designs are used to increase efficiency. 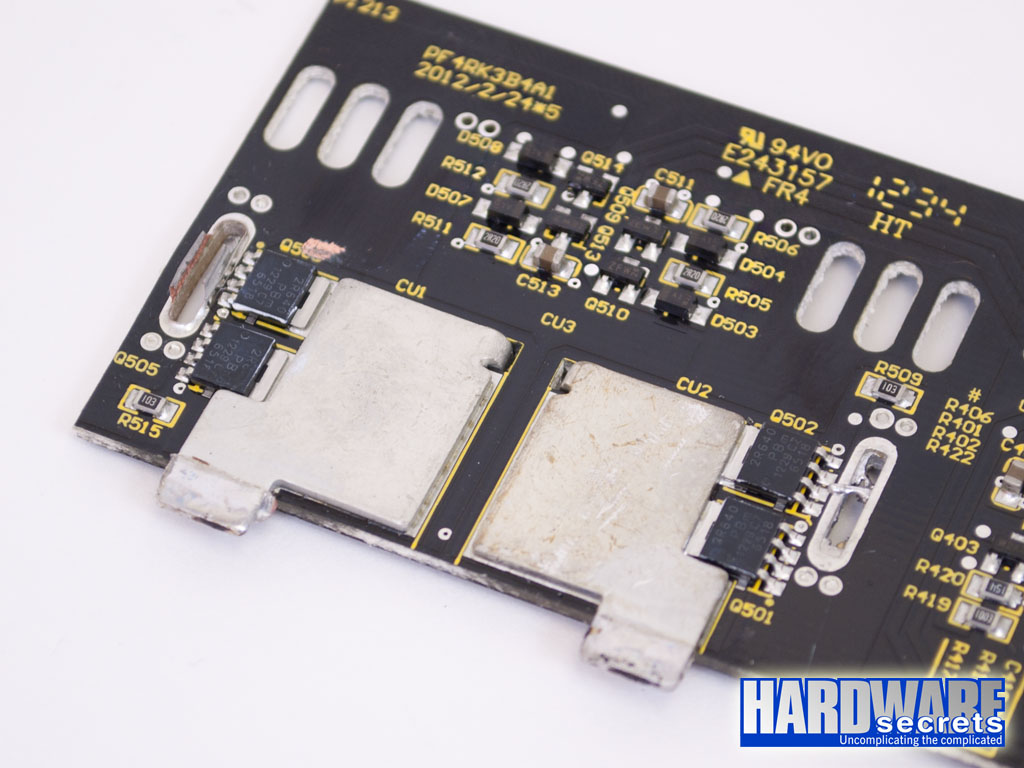 As explained, the +5 V and +3.3 V outputs are produced by two DC-DC converters, which are located on the same printed circuit board as the modular cabling system. This is a different configuration than the one used on the AX760i, which has two separate daughterboards, one for each output. The two converters are controlled by the same PWM controller, an APW7159, and each exit makes use of three BSC0906NS MOSFETs, each one supporting up to 63 A at 25° C or 50 A at 100° C in continuous mode and up to 252 A at 25° C in pulse mode, with a maximum RDS(on) of 4.5 mΩ. 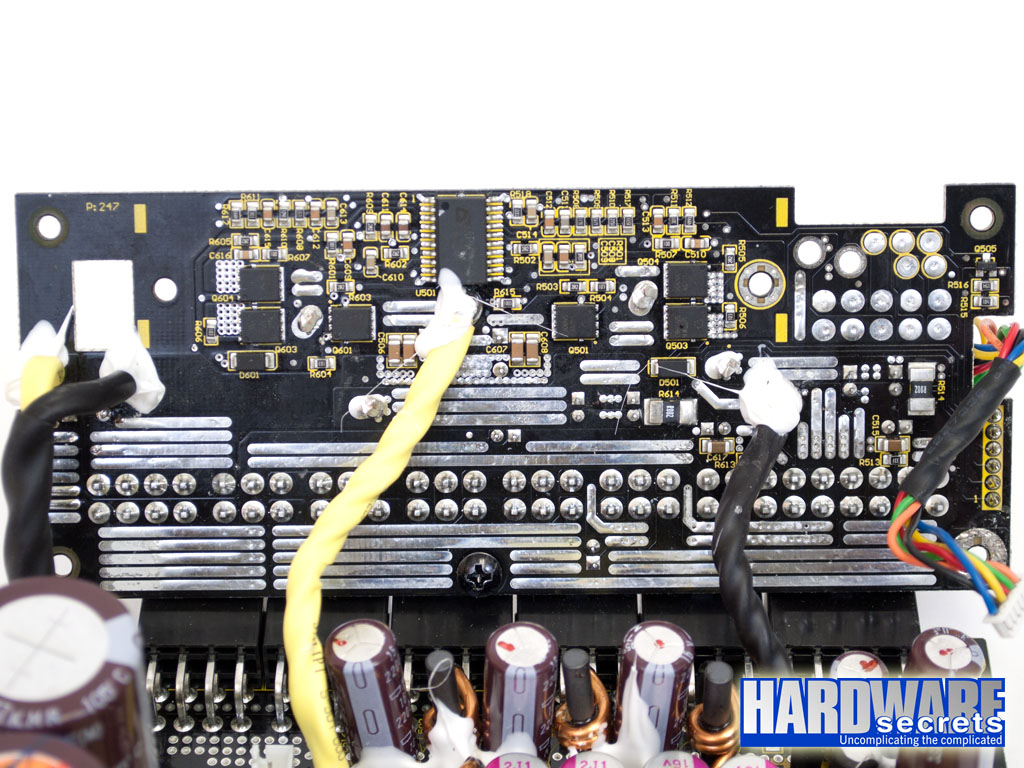 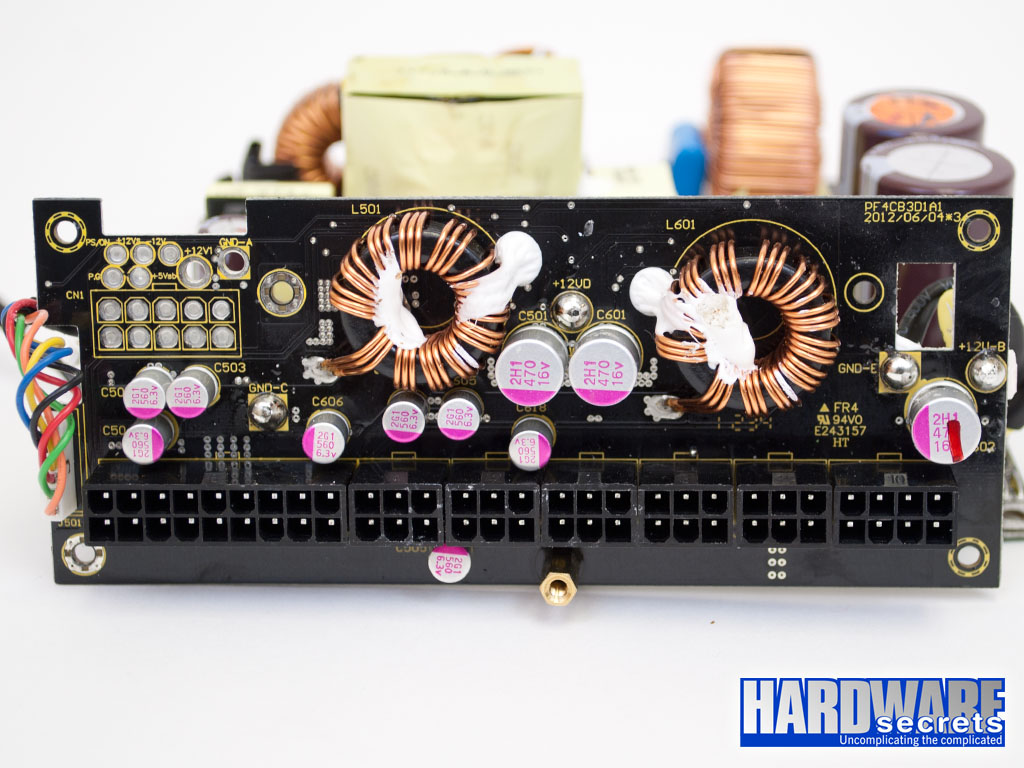 The outputs of the power supply are monitored by a WT7527 integrated circuit, which supports over voltage (OVP), under voltage (UVP), and over current (OCP) protections. There are four OCP channels, one for +3.3 V, one for +5 V, and two for +12 V. The manufacturer, however, decided to use only one of the +12 V channels available, resulting in this unit having a single +12 V rail. 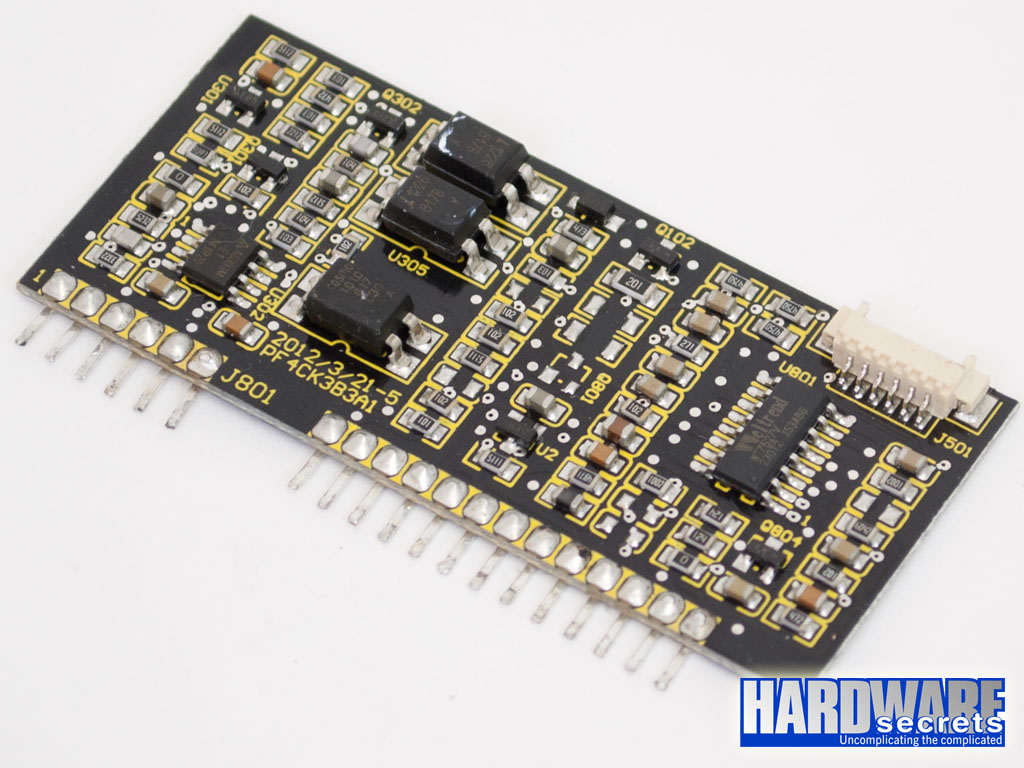 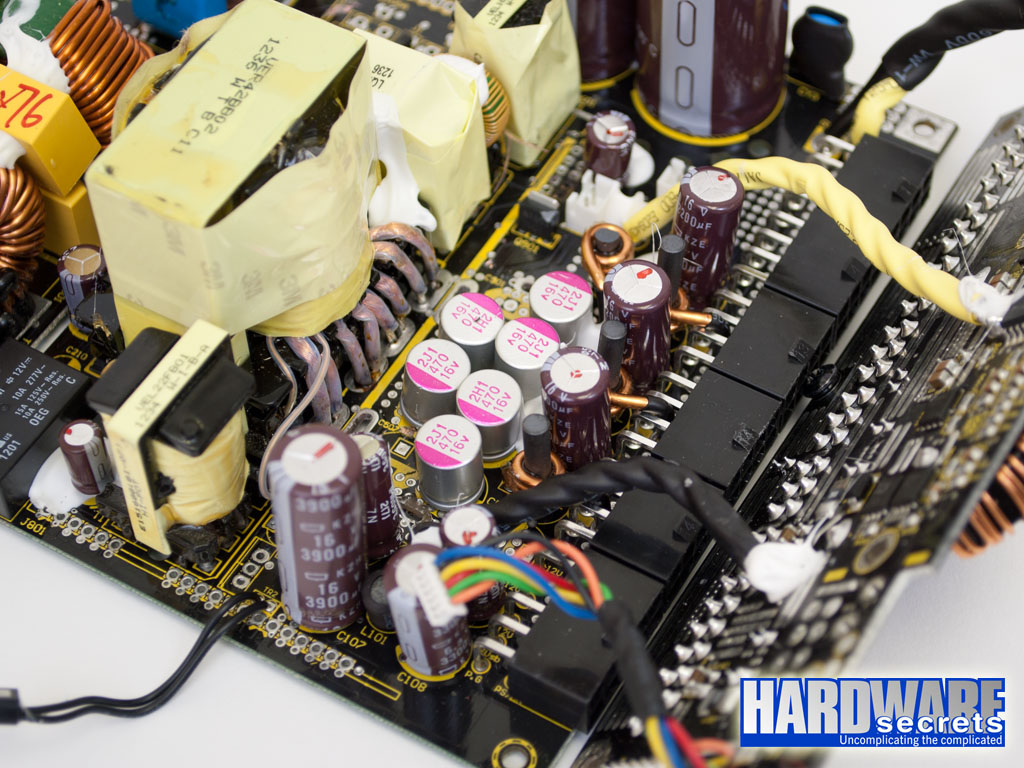 The +5VSB (a.k.a. standby) power supply is independent of the main power supply, since it is on continuously.

The +5VSB power supply uses an ICE2QR4765 integrated circuit, which incorporates the PWM controller and the switching transistor into a single chip. 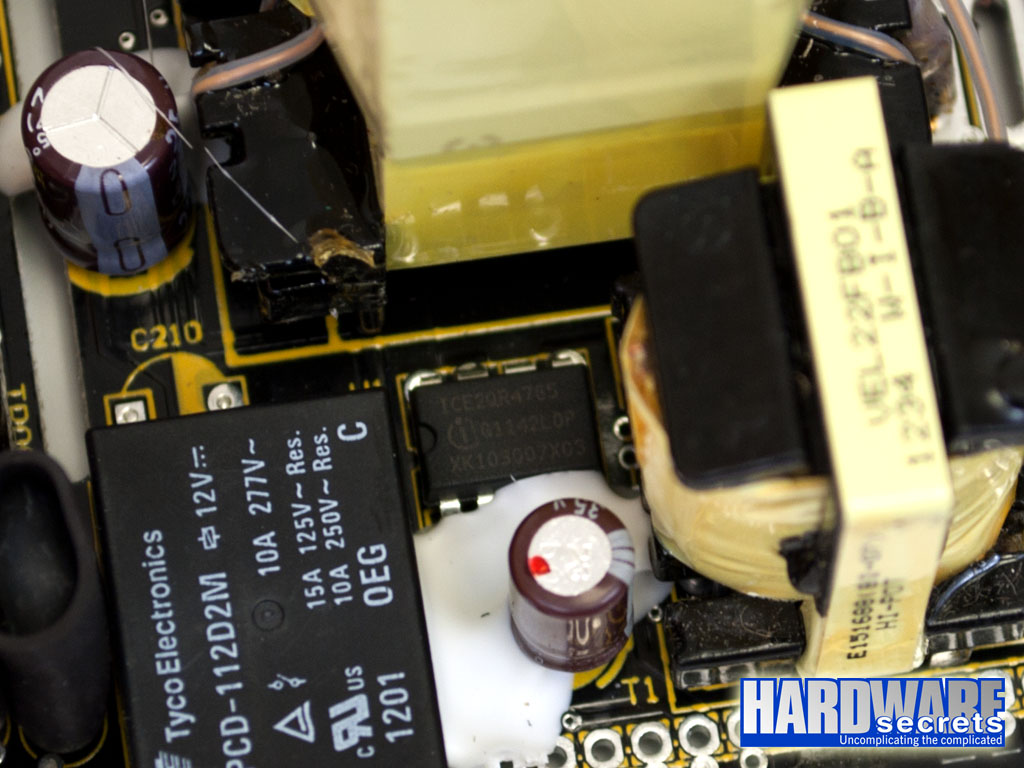 Figure 22: The +5VSB integrated circuit with an integrated switching transistor 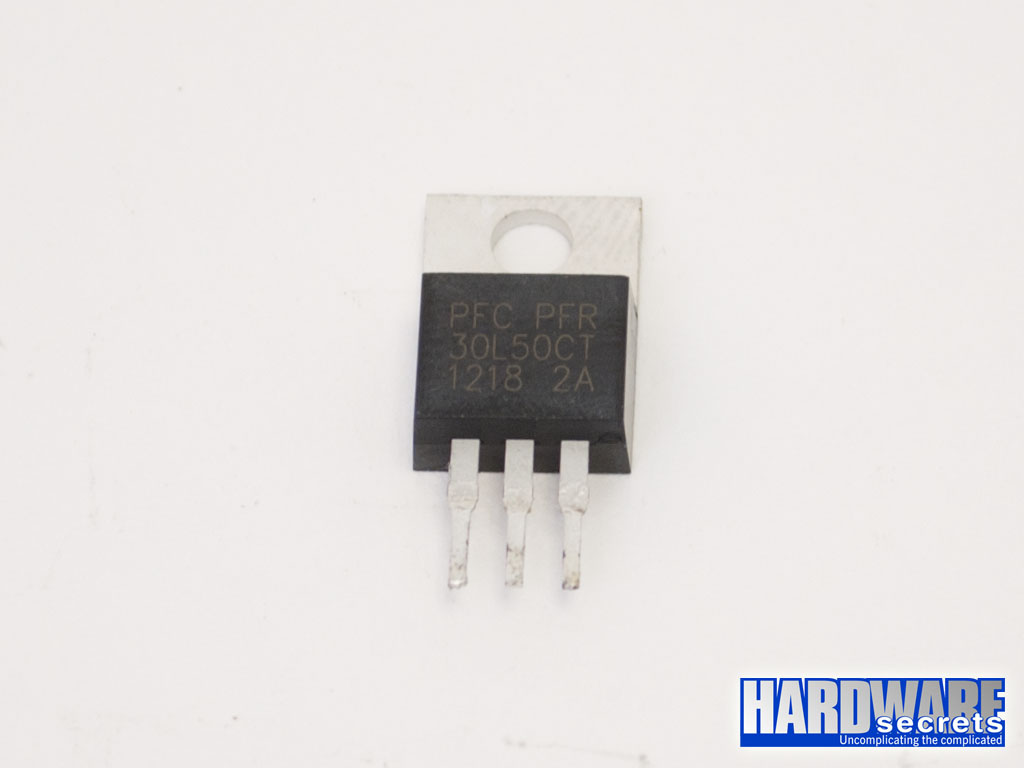 In Figure 24, you can see the power supply label containing all the power specs. 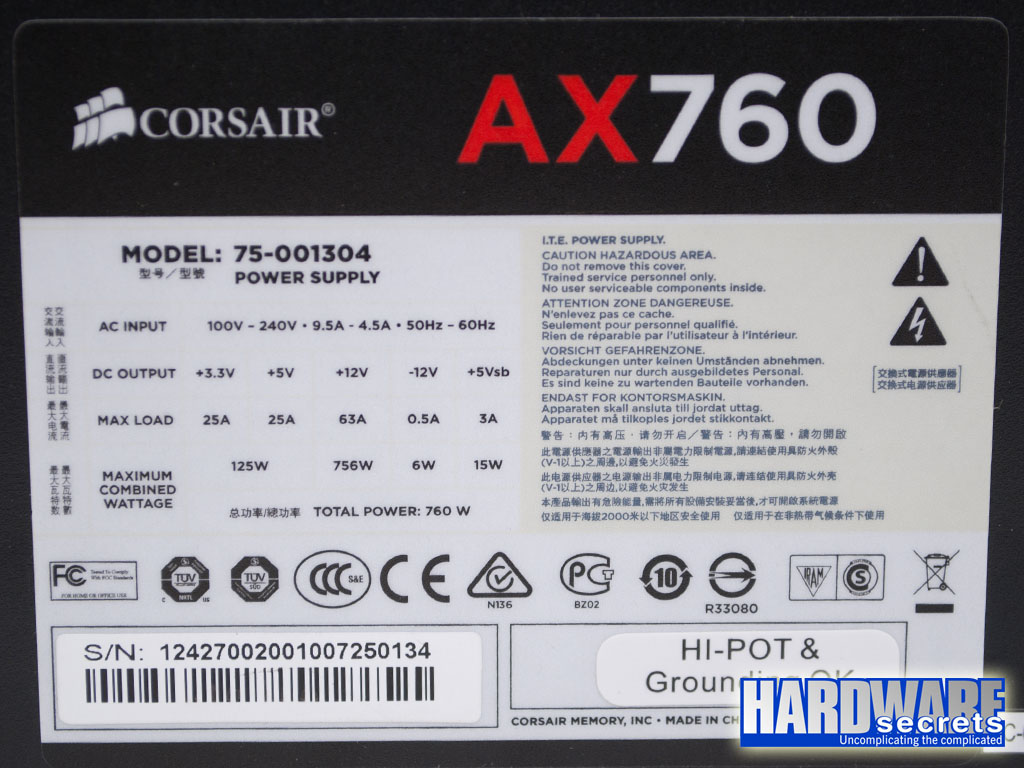 As you can see, this unit has a single +12 V rail configuration.

We conducted several tests with this power supply, as described in the article, “Hardware Secrets Power Supply Test Methodology.”

First, we tested this power supply with five different load patterns, trying to pull around 20%, 40%, 60%, 80%, and 100% of its labeled maximum capacity (actual percentage used listed under “% Max Load”), watching the behavior of the reviewed unit under each load. In the table below, we list the load patterns we used and the results for each load.

If you add all the powers listed for each test, you may find a different value than what is posted under “Total” below. Since each output can have a slight variation (e.g., the +5 V output working at 5.10 V), the actual total amount of power being delivered is slightly different than the calculated value. In the “Total” row, we are using the real amount of power being delivered, as measured by our load tester.

The Corsair AX760 presented outstanding voltage regulation, with all its main positive voltages within 1% of their nominal values.

Voltages at the power supply outputs must be as “clean” as possible, with no noise or oscillation (also known as “ripple”). The maximum ripple and noise levels allowed are 120 mV for +12 V and -12 V outputs, and 50 mV for +5 V, +3.3 V and +5VSB outputs. All values are peak-to-peak figures. We consider a power supply as being top-notch if it can produce half or less of the maximum allowed ripple and noise levels.

The Corsair AX760 provided extremely low ripple and noise levels, as you can see in the table below.

Below you can see the waveforms of the outputs during test five.