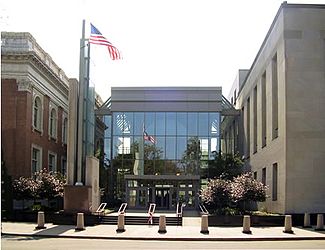 The United States District Court for the Western District of Pennsylvania (in case citations, W.D. Pa.) is a federal trial court that sits in Pittsburgh, Erie, and Johnstown, Pennsylvania. It is composed of ten judges as authorized by federal law. Appeals from this court are heard by the United States Court of Appeals for the Third Circuit (except for patent claims and claims against the U.S. government under the Tucker Act, which are appealed to the Federal Circuit). 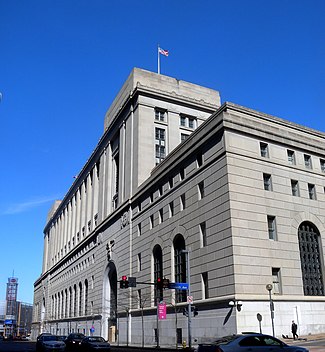 The United States District Court for the District of Pennsylvania was one of the original 13 courts established by the Judiciary Act of 1789, 1 Stat. 73, on September 24, 1789.[1][2] It was subdivided on April 20, 1818, by 3 Stat. 462,[1][2] into the Eastern and Western Districts to be headquartered in Philadelphia and Pittsburgh, respectively.[1] The court began its first session on December 7, 1818 at the Old County Courthouse in Pittsburgh.[3] Portions of these districts were subsequently subdivided into the Middle District on March 2, 1901, by 31 Stat. 880.[2] At the time of its initial subdivision, presiding judge Richard Peters Jr. was reassigned to only the Eastern District. This made it possible for President James Monroe to appoint Jonathan Hoge Walker as the first judge of the Western District of Pennsylvania.

Chief judges have administrative responsibilities with respect to their district court. Unlike the Supreme Court, where one justice is specifically nominated to be chief, the office of chief judge rotates among the district court judges. To be chief, a judge must have been in active service on the court for at least one year, be under the age of 65, and have not previously served as chief judge. A vacancy is filled by the judge highest in seniority among the group of qualified judges. The chief judge serves for a term of seven years or until age 70, whichever occurs first. The age restrictions are waived if no members of the court would otherwise be qualified for the position.

When the office was created in 1948, the chief judge was the longest-serving judge who had not elected to retire on what has since 1958 been known as senior status or declined to serve as chief judge. After August 6, 1959, judges could not become or remain chief after turning 70 years old. The current rules have been in operation since October 1, 1982.

Former United States Attorneys for the district have included:[4]