Skip to content
Tube, nozzle or pipe through which air is blown into a furnace 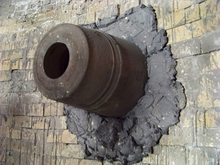 A tuyere being seen from inside of a blast furnace.

A tuyere or tuyère (French pronunciation: ​[tɥijɛʁ]; English: /twiːˈjɛər/)[1][2] is a tube, nozzle or pipe through which air is blown into a furnace or hearth.[3]

Air or oxygen is injected into a hearth under pressure from bellows or a blowing engine or other devices. This causes the fire to be hotter in front of the blast than it would otherwise have been, enabling metals to be smelted or melted or made hot enough to be worked in a forge, though these are blown only with air. This applies to any process where a blast is delivered under pressure to make a fire hotter.

The term (like many technical terms relating to ironmaking) was introduced to England from French with the new technology of the blast furnace and finery forge in around 1500, and was sometimes anglicised as tue-iron or tue iron.[4]

Following the introduction of hot blast, tuyeres are often water-cooled.[3] 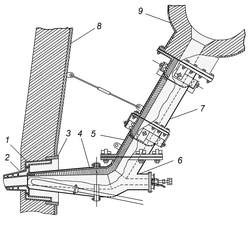