Skip to content
Person who works despite an ongoing strike
For the short story by Isaac Asimov, see Strikebreaker (short story). 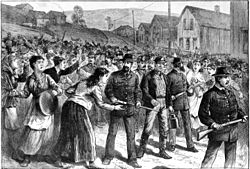 A strikebreaker (sometimes called a scab, blackleg, or knobstick) is a person who works despite a strike. Strikebreakers are usually individuals who were not employed by the company before the trade union dispute but hired after or during the strike to keep the organization running. Strikebreakers may also refer to workers (union members or not) who cross picket lines to work. 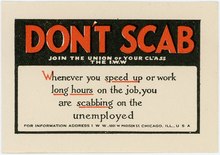 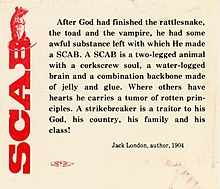 The use of strikebreakers is a worldwide phenomenon; many countries have passed laws outlawing their use to give more power to unionized workers. As of 2002, strikebreakers were used far more frequently in the United States than in other industrialized countries.[1]

The ILO has also concluded striker replacement, while not in contravention of ILO agreements, carries with it significant risks for abuse and places trade union freedoms "in grave jeopardy."[5][6] 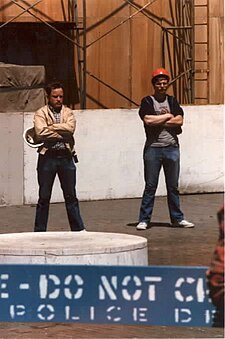 Strikebreakers outside the Chicago Tribune during a 1986 strike

Strikebreaking is also known as black-legging or blacklegging. American lexicographer Stephanie Smith suggests that the word has to do with bootblacking or shoe polish, for an early occurrence of the word was in conjunction with an 1803 American bootmaker's strike.[16] But British industrial relations expert J.G. Riddall notes that it may have a racist connotation, as it was used in this way in 1859 in the United Kingdom: "If you dare work we shall consider you as blacks..."[17] Lexicographer Geoffrey Hughes, however, notes that blackleg and scab are both references to disease, as in the blackleg infectious bacterial disease of sheep and cattle caused by Clostridium chauvoei. He dates the first use of the term blackleg in reference to strikebreaking to the United Kingdom in 1859. The use of the term blackleg for a strikebreaker was, however, previously recorded in 1832 during the trial of special constable George Weddell for killing and slaying Cuthbert Skipsey, a striking pitman, near Chirton, Newcastle-upon-Tyne.[18] Hughes observes that the term was once generally used to indicate a scoundrel, a villain, or a disreputable person.[19] However, the Northumbrian folk song Blackleg Miner is believed to originate from the 1844 strike, which would predate Hughes's reference.[20] David John Douglass claims that the term blackleg has its origins in coal mining, as strikebreakers would often neglect to wash their legs, which would give away that they had been working whilst others had been on strike.[21]

Hughes notes that the use of the term scab can be traced back to the Elizabethan era in England, and is much more clearly rooted in the concept of disease (e.g., a diseased person) and a sickened appearance.[19] A traditional English proverb, which advises against gossip, is "He that is a blab is a scab".[22]

John McIlroy has suggested that there is a distinction between a blackleg and a scab. He defines a scab as an outsider who is recruited to replace a striking worker, whereas a blackleg is one already employed who goes against a democratic decision of their colleagues to strike, and instead continues to work.[23] The fact that McIlroy specified that this should be a "democratic" decision has led the historian David Amos to question whether the Nottinghamshire miners in 1984–85 were true blacklegs, given the lack of a democratic vote on the strike.[24]

Strikebreakers are also known as knobsticks. The term appears derived from the word knob, in the sense of something that sticks out, and from the card-playing term nob, as someone who cheats.[25]