The Pan-American Exposition was a World's Fair held in Buffalo, New York, United States, from May 1 through November 2, 1901. The fair occupied 350 acres (0.55 sq mi) of land on the western edge of what is now Delaware Park, extending from Delaware Avenue to Elmwood Avenue and northward to Great Arrow Avenue. It is remembered today primarily for being the location of the assassination of United States President William McKinley at the Temple of Music on September 6, 1901. The exposition was illuminated at night. Thomas A. Edison, Inc. filmed it during the day and a pan of it at night.[1][2][3]

Planning of the Exposition.

The event was organized by the Pan-American Exposition Company, formed in 1897. Cayuga Island was initially chosen as the place to hold the Exposition because of the island's proximity to Niagara Falls, which was a huge tourist attraction. When the Spanish–American War broke out in 1898, plans were put on hold. After the war, there was a heated competition between the cities of Buffalo and Niagara Falls over the location. Buffalo won for two main reasons. First, Buffalo had a much larger population; with roughly 350,000 people, it was the eighth-largest city in the United States. Second, Buffalo had better railroad connections; the city was within a day's journey by rail for over 40 million people. In July 1898, Congress pledged $500,000 for the Exposition to be held at Buffalo. The "Pan American" theme was carried throughout the event with the slogan "commercial well being and good understanding among the American Republics." The advent of the alternating current power transmission system in the US allowed designers to light the Exposition in Buffalo using power generated 25 mi (40 km) away at Niagara Falls. 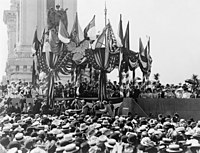 The exposition is most remembered because United States President William McKinley was assassinated by an anarchist, Leon Czolgosz, at the Temple of Music on September 6, 1901. The President died eight days later on September 14 from gangrene caused by the bullet wounds.

On the day prior to the shooting, McKinley had given an address at the exposition, which began as follows:

Expositions are the timekeepers of progress. They record the world's advancement. They stimulate the energy, enterprise, and intellect of the people; and quicken human genius. They go into the home. They broaden and brighten the daily life of the people. They open mighty storehouses of information to the student.[4]

The newly developed X-ray machine was displayed at the fair, but doctors were reluctant to use it on McKinley to search for the bullet because they did not know what side effects it might have had on him. Also, the operating room at the exposition's emergency hospital did not have any electric lighting, even though the exteriors of many of the buildings were covered with thousands of light bulbs. Doctors used a pan to reflect sunlight onto the operating table as they treated McKinley's wounds.

Buildings and exhibits featured at the Pan-American Exposition included:[5] 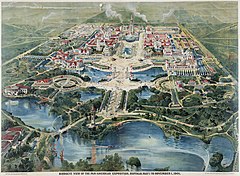 Lina Beecher, creator of the Flip Flap Railway, attempted to demonstrate one of his looping roller coasters at the fair, but the organizers of the event considered the ride to be too dangerous and refused to allow it on the grounds.[12] Buffalo native Nina Morgana, later a soprano with the Metropolitan Opera, was a child performer in the "Venice in America" attraction at the Exposition.[13] Composer/organist Fannie Morris Spencer gave two recitals in the Temple of Music.[14]

When the fair ended, the contents of the grounds were sold to the Chicago House Wrecking Company[15] of Chicago for US$92,000 ($2.61 million in 2021 dollars[16]).[17] Demolition of the buildings began in March 1902, and within a year, most of the buildings were demolished. The grounds were then cleared and subdivided to be used for residential streets, homes, and park land. Similar to previous world fairs, most of the buildings were constructed of timber and steel framing with precast staff panels made of a plaster/fiber mix. These buildings were built as a means of rapid construction and temporary ornamentation and not made to last.[18] Prior to its demolition, an effort was made via public committee to purchase and preserve the original Electric Tower from the wrecking company for nearly US$30,000 ($977,160 in 2021 dollars[16]). However, the necessary funding could not be raised in time.[17]

The site of the exposition was bounded by Elmwood Avenue on the west, Delaware Avenue on the east, what is now Hoyt Lake on the south, and the railway on the north. It is now occupied by a residential neighborhood from Nottingham Terrace to Amherst Street, and businesses on the north side of Amherst Street. A stone and marker on a traffic island dividing Fordham Drive, near the Lincoln Parkway, marks the area where the Temple of Music was located.[19]