Skip to content
A type of industrial furnace for steelmaking
"Open hearth" redirects here. For an open hearth in the home, see hearth. 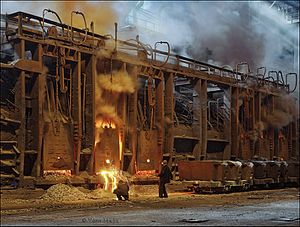 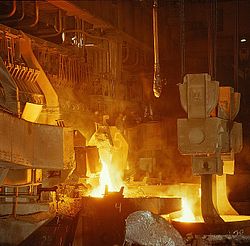 An open-hearth furnace or open hearth furnace is any of several kinds of industrial furnace in which excess carbon and other impurities are burnt out of pig iron to produce steel.[1] Because steel is difficult to manufacture owing to its high melting point, normal fuels and furnaces were insufficient for mass production of steel, and the open-hearth type of furnace was one of several technologies developed in the nineteenth century to overcome this difficulty. Compared with the Bessemer process, which it displaced, its main advantages were that it did not expose the steel to excessive nitrogen (which would cause the steel to become brittle), was easier to control, and permitted the melting and refining of large amounts of scrap iron and steel.[2]

The open-hearth furnace was first developed by German-born engineer Carl Wilhelm Siemens. In 1865, the French engineer Pierre-Émile Martin took out a license from Siemens and first applied his regenerative furnace for making steel. Their process was known as the Siemens–Martin process or Martin–Siemens process, and the furnace as an "open-hearth" furnace. Most open hearth furnaces were closed by the early 1990s, not least because of their slow operation, being replaced by the basic oxygen furnace or electric arc furnace.[2]

Whereas the earliest example of open-hearth steelmaking is found about 2000 years ago in the culture of the Haya people, in present day Tanzania,[3] and in Europe in the Catalan forge, invented in Spain in the 8th century, it is usual to confine the term to certain 19th-century and later steelmaking processes, thus excluding bloomeries (including the Catalan forge), finery forges, and puddling furnaces from its application.

The open-hearth process is a batch process and a batch is called a "heat". The furnace is first inspected for possible damage. Once it is ready or repaired, it is charged with light scrap, such as sheet metal, shredded vehicles or waste metal. The furnace is heated using burning gas. Once the charge has melted, heavy scrap, such as building, construction or steel milling scrap is added, together with pig iron from blast furnaces. Once all the steel has melted, slag-forming agents such as limestone are added. The oxygen in iron oxide and other impurities decarburizes the pig iron by burning excess carbon away, forming steel. To increase the oxygen content of the heat, iron ore can be added.[4]

The process is far slower than that of the Bessemer converter and thus easier to control and sample for quality assessment. Preparing a heat usually takes eight to eight and a half hours, and longer to finish the conversion into steel. As the process is slow, it is not necessary to burn all the carbon away as in the Bessemer process, but the process can be terminated at any given point when the desired carbon content has been achieved.[4]

The furnace is tapped in the same way a blast furnace is tapped; a hole is drilled in the side of the hearth and the raw steel flows out. Once all the steel has been tapped, the slag is skimmed away. The raw steel may be cast into ingots, a process called teeming, or it may be used in continuous casting in the rolling mill.[4]

The regenerators are the distinctive feature of the furnace and consist of fire-brick flues filled with bricks set on edge and arranged in such a way as to have a great number of small passages between them.[4] The bricks absorb most of the heat from the outgoing waste gases and return it later to the incoming cold gases for combustion.

Carl Wilhelm Siemens developed the Siemens regenerative furnace in the 1850s, and claimed in 1857 to be recovering enough heat to save 70–80% of the fuel. This furnace operates at a high temperature by using regenerative preheating of fuel and air for combustion. In regenerative preheating, the exhaust gases from the furnace are pumped into a chamber containing bricks, where heat is transferred from the gases to the bricks. The flow of the furnace is then reversed so that fuel and air pass through the chamber and are heated by the bricks. Through this method, an open-hearth furnace can reach temperatures high enough to melt steel, but Siemens did not initially use it for that.[5]

In 1865, the French engineer Pierre-Émile Martin took out a license from Siemens and first applied his regenerative furnace for making steel. The most appealing characteristic of the Siemens regenerative furnace is the rapid production of large quantities of basic steel, used for example to construct high-rise buildings.[5] The usual size of furnaces is 50 to 100 tons, but for some special processes they may have a capacity of 250 or even 500 tons.

The Siemens–Martin process complemented rather than replaced the Bessemer process. It is slower and thus easier to control, allowing production of better product. It also permits the melting and refining of large amounts of scrap steel, further lowering steel production costs and recycling an otherwise troublesome waste material. One of its important drawbacks is that melting and refining a charge takes several hours. This was an advantage in the early 20th century, as it gave plant chemists time to analyze the steel and decide how much longer to refine it. But by about 1975, electronic instruments such as atomic absorption spectrophotometers had made analysis of the steel much easier and faster. The work environment around an open-hearth furnace is said to be extremely dangerous, although that may be even more true of the environment around a basic oxygen or electric arc furnace.[5]

On the one hand, the process achieves lesser economies of scale than the Bessemer, so its steel was costlier in former's heyday, but on the other, it was more suitable for countries which couldn't produce lots of steel anyway due to limitations of natural resources.[6]