The National Library of Serbia (Serbian: Народна библиотека Србије, romanized: Narodna biblioteka Srbije) is the national library of Serbia, located in the capital city of Belgrade. It is the biggest library, and oldest institution in Serbia, one that was completely destroyed many times over in the last two centuries.[1] 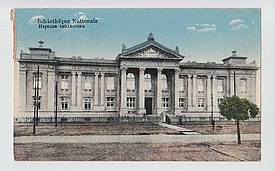 A photograph of the former library building, bombed on 6 April 1941 on the order of Adolf Hitler himself.[2] Around 500.000 volumes and all collections of the library were destroyed in one of the largest book bonfires in European history.[3]

In 1832, the library was established by bookbinder Gligorije Vozarović in his bookstore, and its first collection consisted of gifts of publisher and bookseller Vozarović and other Serbian cultural figures. On 28 February 1832, Dimitrije Davidović sent a letter on the organization of the library to Miloš Obrenović. In November of the same year, Prince Miloš ordered that one copy of each printed book be made available to the library.

During World War I, the Library building and collections were damaged by bombing, so the small remaining holdings were moved from Belgrade to Niš and Kragujevac for their protection. Damages, loses and lack of facilities hampered significantly reconstruction in 1918 and the ensuing years. After the War, and according to the National Library Act and the Press Law, both from 1919, the Library became the central state Library and obtained the right to acquire an obligatory copy from all over the Kingdom of Yugoslavia. With the efforts of Jovan Tomić (1903-1927), a part of the original Belgrade library collection was repatriated from Sofia, Bulgaria. In 1925 the National Library moved into a building in the district of Kosančić Crescent only to be bombed and gutted by fire sixteen years later from 6 to 9 April 1941 at the start of World War II.[4]

The bombing by Nazi Germany's Luftwaffe of a city officially proclaimed open, completely destroyed the Library building including a priceless book collection of 500.000 volumes, an invaluable collection of 1424 Cyrillic manuscripts and charters, a collection of old maps, medieval manuscripts and prints of roughly 1,500 items, collections of 4,000 journals as well as 1,800 newspaper titles, its rich and irreplaceable archives of Turkish documents about Serbia and the complete correspondence of distinguished figures of the cultural and political history of Serbia, and all holdings lists and catalogs. The entire national cultural heritage existing in print almost disappeared overnight.[4] It was not until 1969 that parts of that stolen collection was found in the Federal Republic of Germany and repurchased.[5]

After the liberation of Belgrade in 1944, under the changed social conditions, there was a period of intensive reconstruction of the lost collections and rapid development of the Library.[citation needed]

After the devoted work of the Library staff, the Library again opened its doors to the public in 1947. In 1954, on the 150th anniversary of the First Serbian Uprising, the construction of a new building for the National Library was allowed, and the new Library building (Architect: Ivo Kurtović) was opened with a special ceremony on 6 April 1973. It is located in the Vračar municipality, sharing the naturally elevated plateau with Temple of Saint Sava, as the highest peak of that part of Belgrade.[citation needed]

The renovation of the NLS Interior has been launched in 2007 and was ended in mid-2011, covering the following segments: the main entrance hall for users with exhibition space, the stairway of the entrance hall for users, the toilets at the ground floor and on floor, coffee bar with the kitchen, atrium, main hall on the floor level (floor, ceilings, lighting, information desks for users), all reading rooms at floor level, official entrance at the level of higher ground floor, hall and stairs, the apartment for foreign guests-researchers at the level of lower ground floor, the complete lighting of the NLS and the balconies for users at the level of the main hall and floors. The renovated area for the users was opened in September 2011, opening its doors to many existing and new users.[citation needed]

General collection includes: books printed after 1868 in Serbian and other ex-Yu languages and books printed after 1700 in foreign languages, periodicals from Serbia, ex-Yu and abroad, bibliographies, encyclopedias, lexicons, catalogs, dictionaries, directories in classical and electronic form, organized in an open access reference stock.

Digital library of the National Library of Serbia contains 1.2 million scanned pages in about 70 different collections (Cyrillic manuscripts, old and rare books, books, Serbian children's digital library, newspapers and magazines, cartographic materials, engravings and art material, photographic materials, posters and documentary material, printed music and sound records, catalogs and bibliographies, miscellaneous). NLS also participates in the several international projects such as World Digital Library, with the goal of making Serbian digitised heritage accessible and searchable together with the cultural heritage of other countries. NLS is a partner of the project Europeana Collections 1914-1918 and as a part of this project has published a thematic digital library Veliki rat (Great War) with valuable collections from World War I period.[8]