Henry Anson was the first European settler in what is now called Marshalltown. In April 1851, Anson found what he described as “the prettiest place in Iowa.”[6] On a high point between the Iowa River and Linn Creek, Anson built a log cabin. A plaque at 112 West Main Street marks the site of the cabin.[7] In 1853 Anson named the town Marshall, after Marshall, Michigan, a former residence of his.[8]

The town became Marshalltown in 1862 because another Marshall already existed in Henry County, Iowa (In 1880, Marshall's name changed to Wayland). With the help of Potawatomi chief Johnny Green, Anson persuaded early settlers to stay in the area. In the mid-1850s, Anson donated land for a county courthouse. Residents donated money for the building's construction. In 1863 the title of county seat transferred from the village of Marietta to Marshalltown. The young town then began growing. By 1900, Marshalltown had 10,000 residents. Many industries began developing in Marshalltown, like Fisher Controls, Lennox International and Marshalltown Company.

Marshalltown plays a small but significant role in the life of Ebe Dolliver, a main character in MacKinlay Kantor's Pulitzer Prize-winning novel "Andersonville" (1955).

Adrian Constantine "Cap" Anson, son of Henry and Jennette Anson, was the first European child born in the new pioneer town and is today known as Marshalltown's “first son.” Adrian became a Major League Baseball player and was inducted into the National Baseball Hall of Fame in 1939. He was regarded as one of the greatest players of his era and one of the first superstars of the game.[9] 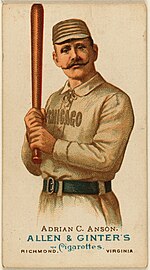 Baseball steadily became popular as Marshalltown grew in the mid-1800s. Adrian's brother Sturgis also became a talented baseball player and both went to play on intra-school teams at the University of Notre Dame. Both later returned to Marshalltown to play baseball for the town team. Along with their father Henry, the town's founder, they put together a team and became the most prominent team in the state of Iowa.[10] The Marshalltown team, with Henry Anson at third base, Adrian's brother Sturgis in center field, and Adrian at second base, won the Iowa state championship in 1868. In 1870 Marshalltown played an exhibition game with the talented Rockford Forest Citys. Although Marshalltown lost the game, Rockford's management offered contracts to all three of the Ansons. Adrian accepted the contract, which began his professional career in baseball in 1871.

Baseball continued its popularity in Marshalltown. In the early 1880s Billy Sunday played for the town baseball team.[11] In 1882, with Sunday in left field, the Marshalltown team defeated the state champion Des Moines team 13–4.[12] Marshalltown later formed a minor league team naming it after the Anson family, the Marshalltown Ansons. From 1914 to 1928 the team played in the Central Association and Mississippi Valley League. 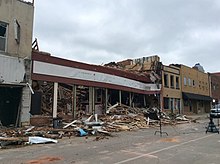 Major structural damage in downtown Marshalltown, Iowa as a result of an EF3 tornado in July 2018.

On April 23, 1961, the south side of town was hit by an F3 tornado. It damaged numerous structures in the area, causing $1 million (1961 USD) in the town alone. It killed one person and injured 12.[13] Marshalltown would be hit again on July 19, 2018, when another EF3 tornado with peak winds of 144 mph moved directly through downtown at 4:37 p.m. local time. It destroyed the spire from the top of the courthouse, while heavily damaging or destroying several homes, businesses, and historic downtown buildings. It was on the ground for 23 minutes along a 8.41-mile-long (13.53 km) path of destruction up to 1,200 yards (1,100 m) wide. Although there were no fatalities, 23 people were injured.[14]

On August 10, 2020, Marshalltown was hit by a powerful derecho, which caused extensive damage throughout the city. Over a hundred cars parked near a factory had their windows blown out. Reports described 99 miles per hour (160 kilometers per hour; 44 meters per second) winds, roofs being ripped off, and loose wood debris embedded in the sides of buildings.[15][16][17] One week after the storm, nearly 7,000 residents of the city were still waiting for power restoration; 99 percent restoration was achieved on August 23.[18][19] The damage to public parks in the city and surrounding Marshall County was "extensive", particularly to trees.[20]

Marshalltown's Hispanic population in particular boomed in the 1990s and 2000s with immigrants mostly from Mexico, just like in many other Midwestern towns with meat-packing plants.[21] Another smaller wave of Burmese refugees later arrived in the 2010s.[22]

Federal law enforcement have twice raided the Swift & Company (now JBS) meatpacking plant, first in 1996 and again in 2006, arresting suspected undocumented immigrants for alleged identity theft.[23] One study estimated the 2006 raid caused a 6-month to 1-year economic recession in the area.[24] Explaining the 2006 raid's effect on the community, Police Chief Michael Tupper told The Washington Post in 2018 that “I think that there’s just a lot of fear that it could happen again. It was a very traumatic experience for our community. Not just for the families and people that were directly impacted, but for our school system, for our local economy, for our community as a whole. It was, in many ways, a devastating experience.”[25]

According to the Köppen Climate Classification system, Marshalltown has a hot-summer humid continental climate, abbreviated "Dfa" on climate maps.

Marshalltown is notably more ethnically diverse than the State of Iowa overall. In 2019, 85% of Iowans were non-Hispanic whites, compared to just 59.8% of Marshalltonians.[30] Most of this discrepancy can be explained by the sizable Hispanic population in Marshalltown (30.7% in 2019).

According to Marshalltown's 2018 Comprehensive Annual Financial Report,[35] the top employers in the city are:

The first schoolhouse in Marshalltown was a log cabin built in 1853. The building stood on Main Street between Third and Fourth Streets. Neary Hoxie served as the first teacher.[36]

In 1874, high school classes were held in an old building on North Center Street. The high school had 45 students and C. P. Rogers served as the school's superintendent.[36]

As of 2020, there are multiple schools in Marshalltown. There are six elementary schools, one intermediate school, a Catholic school (PreK–6) and Christian school (1–8), and a middle school (7–8). There is also Marshalltown High School, with over 1,000 students. East Marshall Community School District serves small portions of the Marshalltown city limits.[37] The district was established on July 1, 1992 by the merger of the LDF and SEMCO school districts.[38] The BCLUW Community School District serves some rural areas nearby Marshalltown.[39]

U.S. Route 30 bypasses the town to the south, while

Iowa Highway 14 runs through the center of town. An expressway,

Marshalltown has bus (Marshalltown Municipal Transit or MMT) and taxicab services. It is also served by Trailways Coach Nationwide.

There currently is no passenger rail service.