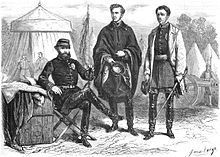 Emperor Pedro II of Brazil (seated) with his two sons-in-law Prince Ludwig August of Saxe-Coburg and Gotha and Prince Gaston of Orléans during the Paraguayan War, 1865

A parent-in-law is a person who has a legal affinity with another by being the parent of the other's spouse. Many cultures and legal systems impose duties and responsibilities on persons connected by this relationship. A person is a child-in-law to the parents of the spouse, who are in turn also the parents of those sibling-in-laws (if any) who are siblings of the spouse (as opposed to spouses of siblings). Together, the members of this family affinity group are called the in-laws.[1]

A father-in-law is the father of a person's spouse.[2] Two men who are fathers-in-law to each other's children may be called co-fathers-in-law, or, if there are grandchildren, co-grandfathers.

A mother-in-law is the mother of a person's spouse.[3] Two women who are mothers-in-law to each other's children may be called co-mothers-in-law, or, if there are grandchildren, co-grandmothers.

In comedy and in popular culture, the mother-in-law is stereotyped as bossy, unfriendly, hostile, nosy, overbearing and generally unpleasant. They are often depicted as the bane of the husband, who is married to the mother-in-law's daughter. A mother-in-law joke is a joke that lampoons the obnoxious mother-in-law character.

A mother-in-law suite is also a type of dwelling, usually guest accommodations within a family home that may be used for members of the extended family.