Case-hardening or surface hardening is the process of hardening the surface of a metal object while allowing the metal deeper underneath to remain soft, thus forming a thin layer of harder metal at the surface. For iron or steel with low carbon content, which has poor to no hardenability of its own, the case-hardening process involves infusing additional carbon or nitrogen into the surface layer. Case-hardening is usually done after the part has been formed into its final shape, but can also be done to increase the hardening element content of bars to be used in a pattern welding or similar process. The term face hardening is also used to describe this technique, when discussing modern armour.

Hardening is desirable for metal components that are subject to sliding contact with hard or abrasive materials, as the hardened metal is more resistant to surface wear. However, because hardened metal is usually more brittle than softer metal, through-hardening (that is, hardening the metal uniformly throughout the piece) is not always a suitable choice. In such circumstances, case-hardening can produce a component that will not fracture (because of the soft core that can absorb stresses without cracking), but also provides adequate wear resistance on the hardened surface.

Early iron smelting made use of bloomeries which produced two layers of metal: one with a very low carbon content which is worked into wrought iron, and one with a high carbon outer layer. Since the high carbon iron is hot short, meaning it fractures and crumbles when forged, it was not useful without more smelting. As a result, it went largely unused in the west until the popularization of the finery forge.[1] The wrought iron, with nearly no carbon in it, was very malleable and ductile but not very hard.

Case-hardening involves packing the low-carbon iron within a substance high in carbon, then heating this pack to encourage carbon migration into the surface of the iron. This forms a thin surface layer of higher carbon steel, with the carbon content gradually decreasing deeper from the surface. The resulting product combines much of the toughness of a low-carbon steel core, with the hardness and wear resistance of the outer high-carbon steel.

The traditional method of applying the carbon to the surface of the iron involved packing the iron in a mixture of ground bone and charcoal or a combination of leather, hooves, salt and urine, all inside a well-sealed box (the "case"). This carburizing package is then heated to a high temperature but still under the melting point of the iron and left at that temperature for a length of time. The longer the package is held at the high temperature, the deeper the carbon will diffuse into the surface. Different depths of hardening are desirable for different purposes: sharp tools need deep hardening to allow grinding and resharpening without exposing the soft core, while machine parts like gears might need only shallow hardening for increased wear resistance.

The resulting case-hardened part may show distinct surface discoloration, if the carbon material is mixed organic matter as described above. The steel darkens significantly, and shows a mottled pattern of black, blue, and purple caused by the various compounds formed from impurities in the bone and charcoal. This oxide surface works similarly to bluing, providing a degree of corrosion resistance, as well as an attractive finish. Case colouring refers to this pattern and is commonly encountered as a decorative finish on firearms.

Case-hardened steel combines extreme hardness and extreme toughness, something which is not readily matched by homogeneous alloys since hard steel alone tends to be brittle.

Carbon itself is solid at case-hardening temperatures and so is immobile. Transport to the surface of the steel was as gaseous carbon monoxide, generated by the breakdown of the carburising compound and the oxygen packed into the sealed box. This takes place with pure carbon but too slowly to be workable. Although oxygen is required for this process it is re-circulated through the CO cycle and so can be carried out inside a sealed box (the "case"). The sealing is necessary to stop the CO either leaking out or being oxidised to CO2 by excess outside air.

increasing the overall abundance of CO and the activity of the carburising compound.[2] It is a common knowledge fallacy that case-hardening was done with bone but this is misleading. Although bone was used, the main carbon donor was hoof and horn. Bone contains some carbonates but is mainly calcium phosphate (as hydroxylapatite). This does not have the beneficial effect of encouraging CO production and it can also introduce phosphorus as an impurity into the steel alloy.

Both carbon and alloy steels are suitable for case-hardening; typically mild steels are used, with low carbon content, usually less than 0.3% (see plain-carbon steel for more information). These mild steels are not normally hardenable due to the low quantity of carbon, so the surface of the steel is chemically altered to increase the hardenability. Case-hardened steel is formed by diffusing carbon (carburization), nitrogen (nitriding) and/or boron (boriding) into the outer layer of the steel at high temperature, and then heat treating the surface layer to the desired hardness.

The term case-hardening is derived from the practicalities of the carburization process itself, which is essentially the same as the ancient process. The steel work piece is placed inside a case packed tight with a carbon-based case-hardening compound. This is collectively known as a carburizing pack. The pack is put inside a hot furnace for a variable length of time. Time and temperature determines how deep into the surface the hardening extends. However, the depth of hardening is ultimately limited by the inability of carbon to diffuse deeply into solid steel, and a typical depth of surface hardening with this method is up to 1.5 mm. Other techniques are also used in modern carburizing, such as heating in a carbon-rich atmosphere. Small items may be case-hardened by repeated heating with a torch and quenching in a carbon rich medium, such as the commercial products Kasenit / Casenite or "Cherry Red". Older formulations of these compounds contain potentially toxic cyanide compounds, while the more recent types such as Cherry Red do not.[3][4] 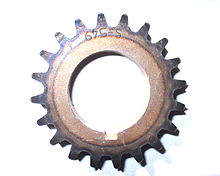 A flame-hardened sprocket. The discoloration around the teeth delineates the area that was rapidly heated and then quenched.

Flame or induction hardening are processes in which the surface of the steel is heated very rapidly to high temperatures (by direct application of an oxy-gas flame, or by induction heating) then cooled rapidly, generally using water; this creates a "case" of martensite on the surface. A carbon content of 0.3–0.6 wt% C is needed for this type of hardening. Unlike other methods, flame or induction hardening does not change chemical composition of the material. Because it is merely a localized heat-treatment process, they are typically only useful on high-carbon steels that will respond sufficiently to quench hardening.

Typical uses are for the shackle of a lock, where the outer layer is hardened to be file resistant, and mechanical gears, where hard gear mesh surfaces are needed to maintain a long service life while toughness is required to maintain durability and resistance to catastrophic failure. Flame hardening uses direct impingement of an oxy-gas flame onto a defined surface area. The result of the hardening process is controlled by four factors:

Carburizing is a process used to case-harden steel with a carbon content between 0.1 and 0.3 wt% C. In this process iron is introduced to a carbon rich environment at elevated temperatures for a certain amount of time, and then quenched so that the carbon is locked in the structure; one of the simpler procedures is repeatedly to heat a part with an acetylene torch set with a fuel-rich flame and quench it in a carbon-rich fluid such as oil.

Carburization is a diffusion-controlled process, so the longer the steel is held in the carbon-rich environment the greater the carbon penetration will be and the higher the carbon content. The carburized section will have a carbon content high enough that it can be hardened again through flame or induction hardening.

It is possible to carburize only a portion of a part, either by protecting the rest by a process such as copper plating, or by applying a carburizing medium to only a section of the part.

The carbon can come from a solid, liquid or gaseous source; if it comes from a solid source the process is called pack carburizing. Packing low carbon steel parts with a carbonaceous material and heating for some time diffuses carbon into the outer layers. A heating period of a few hours might form a high-carbon layer about one millimeter thick.

Nitriding heats the steel part to 482–621 °C (900–1,150 °F) in an atmosphere of ammonia gas and dissociated ammonia. The time the part spends in this environment dictates the depth of the case. The hardness is achieved by the formation of nitrides. Nitride forming elements must be present for this method to work; these elements include chromium, molybdenum, and aluminum. The advantage of this process is that it causes little distortion, so the part can be case-hardened after being quenched, tempered and machined. No quenching is done after nitriding.

Cyaniding is a case-hardening process that is fast and efficient; it is mainly used on low-carbon steels. The part is heated to 871–954 °C (1600–1750 °F) in a bath of sodium cyanide and then is quenched and rinsed, in water or oil, to remove any residual cyanide.

This process produces a thin, hard shell (between 0.25 and 0.75 mm, 0.01 and 0.03 inches) that is harder than the one produced by carburizing, and can be completed in 20 to 30 minutes compared to several hours so the parts have less opportunity to become distorted. It is typically used on small parts such as bolts, nuts, screws and small gears. The major drawback of cyaniding is that cyanide salts are poisonous.

Ferritic nitrocarburizing diffuses mostly nitrogen and some carbon into the case of a workpiece below the critical temperature, approximately 650 °C (1,202 °F). Under the critical temperature the workpiece's microstructure does not convert to an austenitic phase, but stays in the ferritic phase, which is why it is called ferritic nitrocarburization.

Parts that are subject to high pressures and sharp impacts are still commonly case-hardened. Examples include firing pins and rifle bolt faces, or engine camshafts. In these cases, the surfaces requiring the hardness may be hardened selectively, leaving the bulk of the part in its original tough state.

Firearms were a common item case-hardened in the past, as they required precision machining best done on low carbon alloys, yet needed the hardness and wear resistance of a higher carbon alloy. Many modern replicas of older firearms, particularly single action revolvers, are still made with case-hardened frames, or with case coloring, which simulates the mottled pattern left by traditional charcoal and bone case-hardening.

Another common application of case-hardening is on screws, particularly self-drilling screws. In order for the screws to be able to drill, cut and tap into other materials like steel, the drill point and the forming threads must be harder than the material(s) that it is drilling into. However, if the whole screw is uniformly hard, it will become very brittle and it will break easily. This is overcome by ensuring that only the surface is hardened, and the core remains relatively softer and thus less brittle. For screws and fasteners, case-hardening is achieved by a simple heat treatment consisting of heating and then quenching.

For theft prevention, lock shackles and chains are often case-hardened to resist cutting, whilst remaining less brittle inside to resist impact. As case-hardened components are difficult to machine, they are generally shaped before hardening.