Skip to content
Type of rental lodging
For the short story, see The Boarding House. For the film, see Boardinghouse (film). 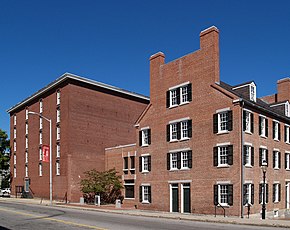 One of the last remaining textile mill boarding houses in Lowell, Massachusetts, on right; part of the Lowell National Historical Park

A boarding house is a house (frequently a family home) in which lodgers rent one or more rooms on a nightly basis, and sometimes for extended periods of weeks, months, and years. The common parts of the house are maintained, and some services, such as laundry and cleaning, may be supplied. They normally provide "room and board," that is, some meals as well as accommodation.

Lodgers legally only obtain a licence to use their rooms, and not exclusive possession, so the landlord retains the right of access.[1] 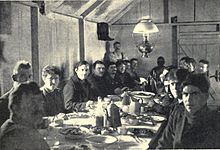 Formerly boarders would typically share washing, breakfast and dining facilities; in recent years it has become common for each room to have its own washing and toilet facilities. Such boarding houses were often found in English seaside towns (for tourists) and college towns (for students). It was common for there to be one or two elderly long-term residents. "The phrase "boardinghouse reach" [referring to a diner reaching far across a dining table] comes from an important variant of hotel life. In boardinghouses, tenants rent rooms and the proprietor provides family-style breakfasts and evening dinners in a common dining room. Traditionally, the food was put on the table, and everyone scrambled for the best dishes. Those with a long, fast reach ate best."[2] 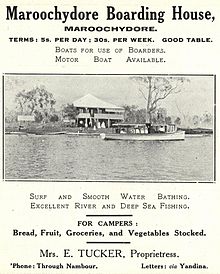 Boarding houses were common in most US cities throughout the 19th century and until the 1950s.[3] In Boston in the 1830s, when landlords and their boarders were added up, between one-third and one-half of the city's entire population lived in a boarding house.[3] Boarding houses ran from large, purpose-built buildings down to "genteel ladies" who rented a room or two as a way of earning a little extra money.[3] Large houses were converted to boarding houses as wealthy families moved to more fashionable neighborhoods.[3] The boarders in the 19th century ran the gamut as well, from well-off businessmen to poor laborers, and from single people to families.[3] In the 19th century, between 1/3 to 1/2 of urban dwellers rented a room to boarders or were boarders themselves.[4] In New York in 1869, the cost of living in a boarding house ranged from $2.50 to $40 a week.[3][a] Some boarding houses attracted people with particular occupations or preferences, such as vegetarian meals.[3]

The boarding house reinforced some social changes: it made it feasible for people to move to a large city, and away from their families.[3] This distance from relatives brought social anxieties and complaints that the residents of boarding houses were not respectable.[3] Boarding out gave people the opportunity to meet other residents, so they promoted some social mixing.[3] This had advantages, such as learning new ideas and new people's stories, and also disadvantages, such as occasionally meeting disreputable or dangerous people. Most boarders were men, but women found that they had limited options: a co-ed boarding house might mean meeting objectionable men, but an all-female boarding house might be – or at least be suspected of being – a brothel.[3]

Boarding houses attracted criticism: in "1916, Walter Krumwilde, a Protestant minister, saw the rooming house or boardinghouse system [as] "spreading its web like a spider, stretching out its arms like an octopus to catch the unwary soul."[2] Attempts to reduce boarding house availability had a gendered impact, as boarding houses were typically operated or managed by women "matrons"; closing boarding houses reduced this opportunity for women to make a living from operating these houses.[6]

Later, groups such as the Young Women's Christian Association provided heavily supervised boarding houses for young women.[3] Boarding houses were viewed as "brick-and-mortar chastity belts" for young unmarried women, which protected them from the vices in the city.[4] The Jeanne d'Arc Residence in Chelsea, which was operated by an order of nuns, aimed to provide a dwelling space for young French seamstresses and nannies.[4] Married women who boarded with their families in boarding houses were accused of being too lazy to do all of the washing, cooking, and cleaning necessary to keep house or to raise children properly.[3] While there is an association between boarding houses and women renters, men also rented, notably the poet-authors Walt Whitman and Edgar Allan Poe.[4]

In the decades after the 1880s, urban reformers began working on modernizing cities; their efforts to create "uniformity within areas, less mixture of social classes, maximum privacy for each family, much lower density for many activities, buildings set back from the street, and a permanently built order" all meant that housing for single people had to be cut back or eliminated.[2] By the early 1930s, urban reformers were typically using codes and zoning to enforce "uniform and protected single-use residential district[s] of private houses", the reformers' preferred housing type.[2] In 1936, the FHA Property Standards defined a dwelling as "any structure used principally for residential purposes", noting that "commercial rooming houses and tourist homes, sanitariums, tourist cabins, clubs, or fraternities would not be considered dwellings" as they did not have the "private kitchen and a private bath" that reformers viewed as essential in a "proper home".[2] As a result, boarding houses became less common in the early 20th century. Another factor that reduced boarding house numbers was that improved mass transit options made it feasible for more city residents to live in the suburbs and work in the city.[3] 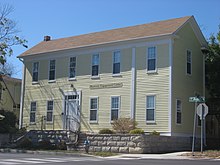 The common lodging-house or flophouse usually offered a space to sleep, but little else. When used for temporary purposes, this arrangement was similar to a hostel. Flophouse beds may offer dormitory-style space for as little as one night at a time.

A lodging house, also known in the United States as a rooming house, may or may not offer meals.

Single room occupancy (SRO) buildings rent individual rooms to residents, and have a shared bathroom; some may have a shared kitchen space for residents to cook their own meals.[3]

Dormitory accommodations for post-secondary students are similar to a boarding houses when they include cafeterias.[3]

In the 2010s, microapartments with one or two rooms rented plus access to shared common spaces in the building are very similar to boarding houses.[3] WeWork, a company mostly known for its shared coworking rental spaces, is also offering shared housing arrangements in which renters get a private bedroom but share a kitchen, living room, and other common areas.

Bed and breakfast accommodation (B&B), which exists in many countries in the world (e.g. the UK, the United States, Canada, and Australia), is a specialized form of boarding house in which the guests or boarders normally stay only on a bed-and-breakfast basis, and where long-stay residence is rare.

However, some B&B accommodation is made available on a long-term basis to UK local authorities who are legally obliged to house persons and families for whom they have no social housing available.[clarification needed] Some such boarding houses allow large groups with low incomes to share overcrowded rooms, or otherwise exploit people with problems rendering them vulnerable, such as those with irregular immigration status. Such a boarding-house may well cease to be attractive to short-term lodgers, and the residents may remain in unsatisfactory accommodation for long periods. Much old seaside accommodation is so used, since cheap flights have reduced demand for their original seasonal holiday use.

Apart from the worldwide spread of the concept of the B&B, there are equivalents of the British boarding houses elsewhere in the world. For example, in Japan, minshuku are an almost exact equivalent although the normal arrangement would be the equivalent of the English half-board. In Hawaii, where the cost of living is high and incomes barely keep pace,[citation needed] it is common to take in lodgers (who are boarders in English terminology) that share the burden of the overall rent or mortgage payable.

In the Indian subcontinent boarders are also known as paying guests. Paying guests stay in a home and share a room with domestic facilities. Rates are nominal and monthly charges are usually inclusive of food, bed, table and a cupboard. The rent can go higher for a room in an upscale locality with facilities like single occupancy, air conditioning and high-speed wireless internet access.

In the United States, zoning has been used by neighborhoods to limit or outright ban boarding houses.[citation needed]